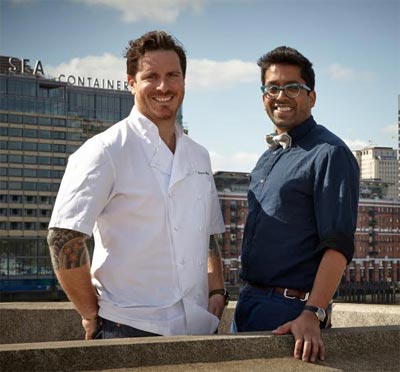 Exclusive announcement. The rumours had been around for a while but now it's confirmed that another big-name New York chef is on the way to London.

Seamus Mullen has been garnering many plaudits for his West Village Spanish restaurant Tertulia, which was a finalist for Best New Restaurant in the James Beard Awards when it opened in 2011. He's also got a popular tapas bar El Colmado in the Gotham West Market.

Now we know he's heading up the main restaurant at the Mondrian Hotel opening Thameside this summer - although little is known about the menu at this stage. We know it will "combine the best of Britain with America" with produce from nearby Borough market.

The restaurant will be on the ground floor of the hotel overlooking the river with an impressive looking open kitchen and "visible wood-fired oven". There will also be a spot for counter dining and an outdoor terrace overlooking the Thames. In charge of the kitchen will be Executive Chef Luke Rayment, previously head chef at Gordon Ramsay at Claridges.

But that's not all that's coming to the Mondrian as the cocktail bar sounds just as impressive. That'll be headed up by Ryan Chetiyawardana (AKA Mr. Lyan) who launched the much-lauded White Lyan cocktail bar in Hoxton last year. His bar is Dandelyan and is also on the ground floor alongside Mullen's restaurant. Again, the cocktail menu is still to be revealed but we are told it "will use carefully sourced fruits, vegetables, and fresh herbs combined with modern tools and proprietary techniques to elevate classic drinks and re-imagine flavour combinations".