[SIGPLUS_EXCEPTION_SOURCE] Image source is expected to be a full URL or a path relative to the image base folder specified in the back-end but /blog/2014/savoy-beaufort/gallery/ is neither a URL nor a relative path to an existing file or folder.
0
Shares 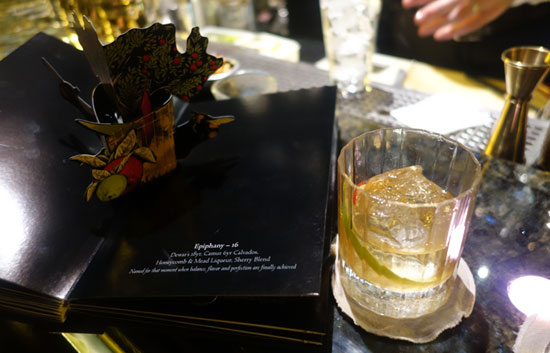 It's one of life's great pleasures to sit, sipping strong cocktails in opulent surroundings and the Beaufort Bar at the Savoy is right up there with the best of them. But now they've got a new trick to entice folk into their drinking den.

Head Bartender Chris Moore has joined forces with illustrator Joe Wilson to come up with a beautiful new bar menu which takes the form of a limited edition pop-up book. With cocktails inspired by everything from the Embankment Gardens outside the hotel to the world of Frank Sinatra guests are guided through the cocktail list from light to dark. Only a thousand, numbered copies have been made of the menu which can be bought for £50.

Hot Dinners popped along to try a few of the cocktails. First out was The Impressionist featuring Cherry Marnier, Creme de Violette, Raspberry Sugar topped up with Ruinart Rose Brut (£26). It was served with a pot of roses from which poured forth a torrent of rose-scented fog. VERY romantic and perfect for continuing HotDinners2's unerring ability to order the pinkest cocktail on any given drinks list.

We also had an Old Blue Eyes (£40) inspired by Sinatra and served with another serving of the drink inside a mini bottle of Jack Daniel's Single Barrel for us to take away with us. The Ephiphany (£16) was named, as Chris explained, after the nine months he took coming up with a light whisky cocktail - his winning concoction featured Dewars, Calvados and a sherry blend with mead.

The pop-up cocktail menu is available now at the Beaufort Bar in the Savoy - Strand, Savoy Way, London WC2R 0EU. For more information, follow them on Twitter @TheSavoyLondon.

The pop-up book and accompanying cocktail at The Savoy tonight https://t.co/Hkj0q51Pcn