Salvation in Noodles expands with a new restaurant in Finsbury Park 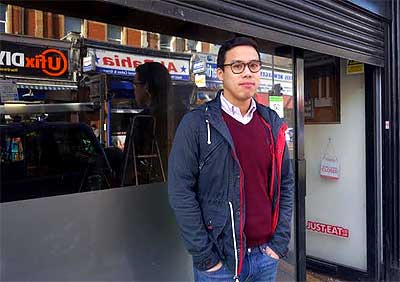 Popular Dalston noodle joint Salvation in Noodles is branching out. They're already hard at work renovating their next opening on Blackstock Road, taking over the space that used to be the N4 tandoori.

Hot Dinners caught up with owner Colin Tu (pictured) to find out what we can expect from the new place. Turns out the opening of their Finsbury Park site coincides with him also taking on a new production kitchen to help with demand, particularly at Dalston where the kitchen is pretty tiny.

The Finsbury Park restaurant will have 36 seats and a bigger kitchen than Dalston, he told us. "We're going to mix up the menu a bit at both sites - maybe take away some of the noodle soups."

To that end he spent Christmas and New Year travelling round Vietnam for inspiration. "I feel you can get pho pretty much anywhere in London but there are other dishes there that haven't been introduced here. So Mi Quang - a dish specific to central Vietnam, but it's half dry, so not as soupy as other dishes. I saw so many dishes out there I think we're ready to introduce here."

He's also introducing cocktails with a cocktail bar running down one side of the room with seating for six. There's also going to be a banquet table with room for 12 towards the front and then booth seating down the side of the room.

So why Finsbury Park. "I'm a longterm fan of Dotori, and that's always popular, so we know there's a demand here for Asian food. And Bleecker Burger's Xan who lives nearby said it was a good idea!"

Salvation in Noodles Finsbury Park will open July 11 at 2 Blackstock Road, London N4 2DL. There's 50% off food for Saturday and Sunday (walk-ins only) and the first 20 customers both days (11 and 12 July) will each get a free glass of prosecco.