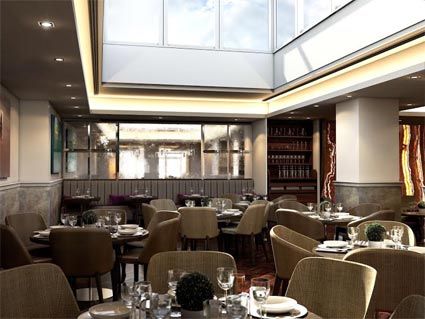 This restaurant chain has been established in the Middle East, with restaurants in Lebanon, Jeddah and Dubai, and now they've settled on a London home in Belgravia (taking over from Palm).

What you need to know about Salmontini

It's already a hit in the Middle East. It's from owners Joe Bassili and Hussni Ajlani, whose restaurants are based around serving top quality smoked salmon - all stemming from a visit to the Shetland Isles by Bassili and from working in his father's smokehouse from an early age. Originally they set up a smokehouse in the Hayata mountains in Lebanon, which still provides the smoked fish for their restaurants. They've now got restaurants across Lebanon, Jeddah and Dubai.

The menu will revolve around hot and smoked salmon (hence the name) - they plan to offer a variety of cold and hot salmon. Taking a look at the Lebanon menu, that looks like the following: Marinated Smoked Salmon, Salmon Gravadlax, Julienne Salmon Salad, Salmon Tartar, Salmon Carpaccio. On top of that, there are a number of platters there which include "Smoked Heart Of Salmon." Exactly how much of this makes its way to the UK is still being worked out by Head Chef Esteve Prats Grau, who's most recently been at Tom’s Kitchen.

But it's not all salmon (despite the name). Again, looking at the existing restaurants, we can expect plenty of steak and chops, including the confirmed "Entrecôte 'St Germain des Prés". And of course a few salmon mains like Ricotta Stuffed Salmon Fillet with Chives Sauce and Salmon Couscous, Spicy Harissa Sauce.

The look of the restaurant is being overhauled by the designers behind Café de Paris, Madame Jojo's, Noura and Volupté, The first floor will have a bar and restaurant, with a "Royal Dining Table" for ten people. There's also a private dining room downstairs which can fit 36 people.

And when does it open? September.