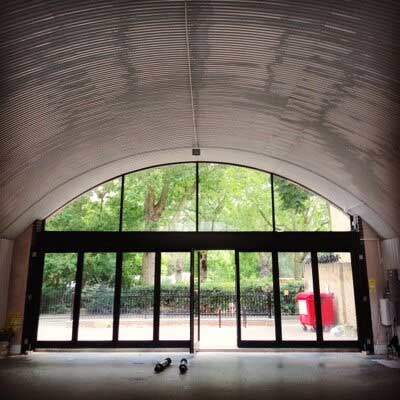 Wine bars are very much back in vogue and heading up the pack is Hackney's Sager & Wilde, who have rarely been out of the press since they opened in August last year.

Now Michael & Charlotte Sager-Wilde are getting ready to open their second venue, Mission in the railway arches of Bethnal Green. Just down the road from the Town Hall Hotel, it's fast becoming one of the more exciting new food and drinks areas of London, with Mother Kelly's, London Cocktail Club and Japanese Canteen already open in nearby arches.

Sager & Wilde's The Mission is a nod towards the couple’s favourite neighbourhood and is also the name of the first grape ever planted in California's wine country. So that means that New Californian wines will very much be the focus of the new venue (something which pleases Hot Dinners very much). We're told to expect a lot of exclusive new California wine including a Sager + Wilde Pinot Noir produced by Domaine de la Cote.

But wines are not the only focus as there will also be a list of classic American cocktails and a greater emphasis on food. James De Jong (previously at Islington's The Drapers Arms) will be in charge of the food menu and will "marry Californian-style cooking with Italian influences" for a dinner and weekend brunch, with a wood-fired grill being put to good use. Confirmed dishes include Duck Pappardelle, Ox heart tartare, Rose veal chop with caponata and anchovy, and Mackerel with pickled gooseberries and horseradish. A lunch service will be following later on.

The bar will seat 60 and overlooking the bar is a mezzanine and a private dining room which will seat a further 30. And it'll be a spot to head to for some late-summer alfresco drinking with an outside terrace space too.

Mission opens 4 September with a soft launch (50% off food from 4-14 September) at 250 Paradise Row, London, E2. They will be taking reservations (email hello@missione2.com) and walk-ins. For more information, follow them on Twitter@mission_e2.