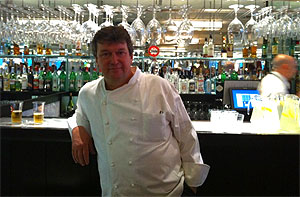 Hot Dinners was over in Bayswater last night for the opening of the new Oyster Bar at Rowley Leigh's Le Café Anglais where the place was mobbed with foodies and locals checking out the new layout. The piece de resistance, style-wise, was clearly the astonishing crystal chandelier over the new oyster bar which made the whole place look swanky but fun.

Although we were delighted that our favourite dish - parmesan custard with anchovy toast - was on offer, we were also happy to try some of the newer dishes including the delicious tuna served up with a garlic, shallot and ginger dressing, the recipe for which Head Chef Colin Westal confided was one part garlic, two parts ginger, three parts shallot with sunflower oil and light soy sauce (it's a perfect dinner-party recipe steal!).

Guests at last night's do included Matthew Fort, Tom Parker-Bowles and Waitrose Kitchen Editor William Sitwell. Hot Dinners nabbed a moment with owner Rowley Leigh to ask him why he'd decided to launch the oyster bar now. 'Because the restaurant drifted from being what I'd originally intended - somewhere where people can drop in,' he told us. 'I thought we needed to do something slightly less expensive and less formal. The idea is to create something different. I latched on the idea of an oyster bar because it was absolutely the most logical thing to do with a French brasserie.'

Next month, Le Café Anglais is hosting The London Restaurant Festival's The Big Quiz which has morphed from being a university challenge affair to a more egalitarian foodie-style pub quiz. 'It's going to be a bit more fun,' Rowley told us. 'We're going to have a new round instead of having a picture round, we're going to have an hors d'oeuvres round so what you eat is the quiz - it's a clever idea but I haven't a clue how we're going to do it yet!'