Round-up - Atherton's Social Sundays, KERB's Alchemy is back, J Sheekey breaks out the terrace and more...

Written by Nancy Smallwood
Created: 05 May 2017

Time for a quick run-down of the rest of this week's news... 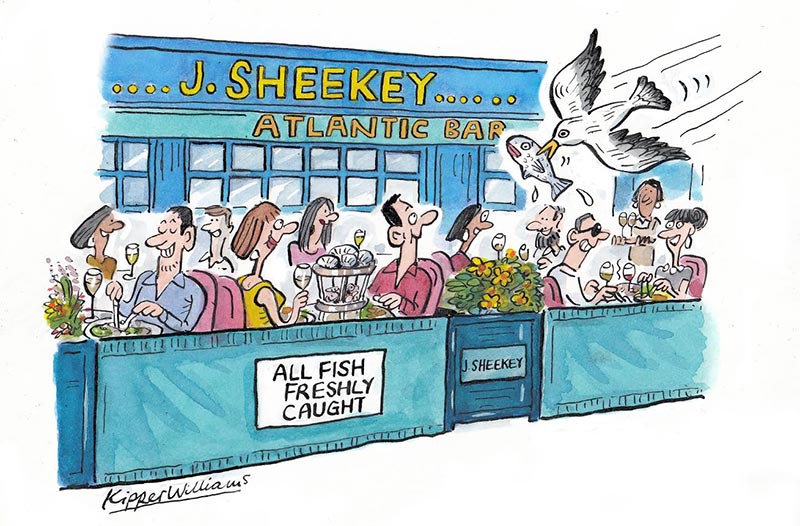 Summer MUST be nearly here as it's time for J Sheekey to get out the Summer Terrace - and this year they've joined up with cartoonist Kipper Williams who's cartoons will adorn the menus and place mats. But that's not all - they're adding five new dishes to its menu this summer, including Ahi tuna poke, seared Galician octopus with smoked paprika and Moroccan-spiced prawns.  The terrace is back on 8 May, get more info here.

Every year Jason Atherton teams up with some of the best in the business and it's that time again...

All eight of Jason and Irha Atherton’s London restaurants will see a one-off collaboration this June in the return of ‘Social Sunday’. The collaboration is designed to raise funds in aid of Hospitality Action, and will include top chefs like Elizabeth Allen, Mark Jarvis, James Cochran. On top of that, they'll be joinuing forces with top bartenders in their bars too. So Atherton’s The Blind Pig bar will also welcome folk from Peg + Patriot, Coupette, Callooh Callay and Dandelyan.

Get more info on Social Sunday

Things are about to heat up on the South Bank when KERB launches their 12-day Alchemy Festival. From the 18-27 May during lunch and dinner, 27 traders will be cooking up spicy street food from across India, Pakistan, Nepal, Bangladesh, Afghanistan and Sri Lanka. There’ll be appearances from Bun Kabab, Chaatit, The Indian’s Next Door, Zouk, Curry Cookhouse, Rola Wala and heaps more. Get more info here.

Michelin-starred Bonhams Restaurant will do free corkage on Wednesdays

Fancy breaking out that bottle you've been holding back for a special occasion? Michelin-starred Bonhams Restaurant is offering free corkage on Wednesdays, allowing you to shave a rather hefty chunk off your bill. You’ll even be able to bring in the bottle in advance so sommelier Charlotte Logan-Jones can decant it in advance. Get more info on the Bonhams website.

Perilla and Pollen Room team up for cocktails

Perilla and Pollen Room are teaming up for a two-week cocktail collaboration which will match with dishes from Perilla’s tasting menu. It’ll be headed up by Anya Montague, who’s fresh from working with Dan Barber at WastED. The drinks will include Purslane, made with Napue gin from the Kyro distillery in Norway, unfortified fino sherry, pickled sea purslane and homemade vermouth and the Nettle which combines white nettle cordial, Dewars 12, cow parsley and citric solution. More about Perilla.