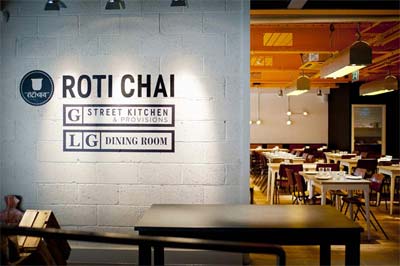 Another pop up is making its way south of the river for the last gasp of Summer. Roti Chai, the Indian street food restaurant in Mayfair which we rather liked, is coming to the South Bank to take part in the Indian music festival Darbar.

They'll be setting up a "Chaat Shack" outside the Elizabeth Hall, with an accompanying bar inside. A collection of "street chaats" will be served up including Bombay Bhel Puri, Aloo Papri Chaat and Tandoori Chicken Chaat. On top of that they'll also have GT Road Dhaba Chicken and Aloo Gobi Sabzi, both served with rice.

Inside, the bar will be selling some of Roti Chai's signature drinks, including Lychee Teapot Martini and Pushkar Pimms.

And if you're after some nibbles with your drink, there will be Keralan Banana Chips and Mango Kulfi (on a stick).

Roti Chai’s Chaat Shack & Bar will be at the Festival Village at the Southbank Centre from September 27th - 30th from midday until 10.30pm.