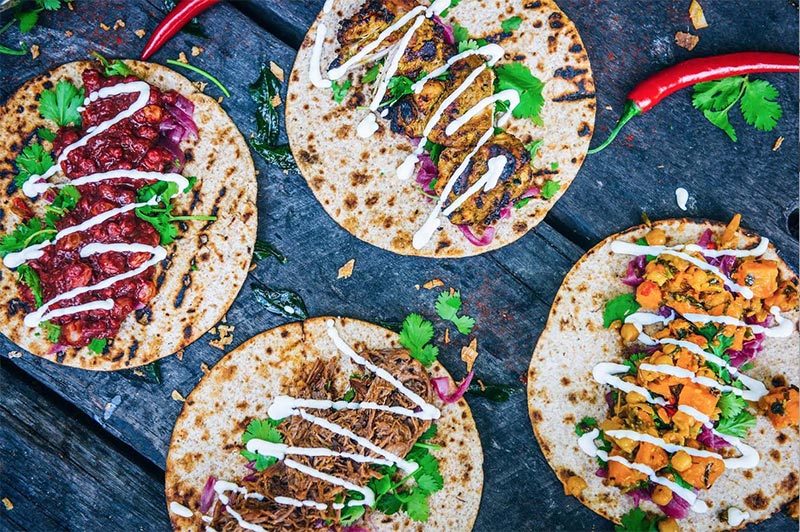 Summing it all up: After a long relationship with Street Feast, Rola Wala finally becomes a permanent fixture in Spitalfield, with their healthy do-it-yourself Indian grub, including Nagaland lamb, Bengali-spiced beef and plenty to please the vegan and gluten-free crowd too.

Rola Wala will be the latest in a long line of street food trucks to move into a permanent home it moves into Spitalfields’ Brushfield Street this July.

There, they’ll be dishing out their healthy Indian fast food that goes easy on the calories and big on the flavours (each dish has at least 43 ingredients!), served up with sourdough naan or seasonal grain bowls. Carb-avoiders can opt for the low-carb version, or there’ll be totally gluten-free options as well, and plenty in store for veggies and vegans too.

It’s a kind of build-your-own-lunch set up, where diners will pick their base, selecting from options like naan, rice, masala noodles or charred broccoli, then topping it up with various fillings and chutneys.

Some of the fillings include:

If you’re concerned about moderating your spice (as you probably should be with anything containing the word ‘Naga’), you can stay at least partly in control thanks to their range of chutneys, which range from no chilli at all to “the world’s hottest.” Once you’re suitably burning up, you can try Mango, Lime and Turmeric sodas made in Hackney’s Square Root, as well as craft beers and wines.

There’ll be a feel good factor as well, thanks to Rola Wala’s partnership with One Feeds Two, meaning for every naan roll sold, a school meal is provided to a child living in poverty.

From 15 June, you’ll also be able to try a preview before the Spitalfields venue opens at The Griffin in Shoreditch where Rola Wala’s will be selling Chapatti Kati rolls with fillings like the Nagalamb lamb.

Opening offer: 300 rolls to be given away on opening day. To get a voucher, sign up here.