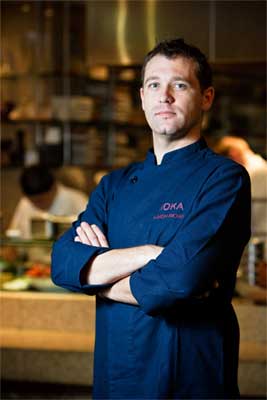 It's a big year for Arjun Waney and Rainer Becker's Roka micro-chain. In Spring, they opened their smallest restaurarnt Roka Mayfair, now they're about to fling open the doors on their largest venture, Roka Aldwych.

The newest restaurant will have room for 160 people and unlike their other venues will be all on one floor. Hot Dinners sat down for an exclusive chat with the group's Executive Chef Hamish Brown to find out more.

The building they're inhabiting - Aldwych House - was previously an office block, so they took possession of the space as a completely blank canvas. Which may have had something to do with the fact that for the first time since they opened Roka on Charlotte Street, they've opted to work with a different designer. Claudio Silvestrin is taking charge of the space in Aldwych. Silvestrin was the designer behind L'anima and Princi Bakery in London.

"It's still a Roka, but it's got its own ambience and identity," explains Hamish. "The robata is still the main focus but instead of wood there's stone. The lines are cleaner and there's a different energy - it's going to be very sophisticated."

With plenty of natural light, expect to see a Japanese bathtub with running water greeting you in the reception. There'll be a big lounge bar in the front of the building, high communal dining at the bar ("a first for Roka") a well as lounge dining and the robata bar.

As for new dishes, Hamish confirmed a few they'll be putting on. "One of our pastry chefs has been playing around with ideas for an amazing cheesecake from Hokkaido in Northern Japan - really different, like a souffle but with a really light cheescake flavour. They call it cotton-style cheesecake." And "Japanese Wagyu has just come on to the market. So we're working on Japanese steak tartare - we're still in the development stages but hopefully we'll have that ready for Aldwych."

Since this interview - a few more dishes have been revealed:

As for drinks, expect to see Micronesia-style cocktails. "We're taking the Pacific islands off the bottom of Japan and using them as inspiration - think tropical islands."