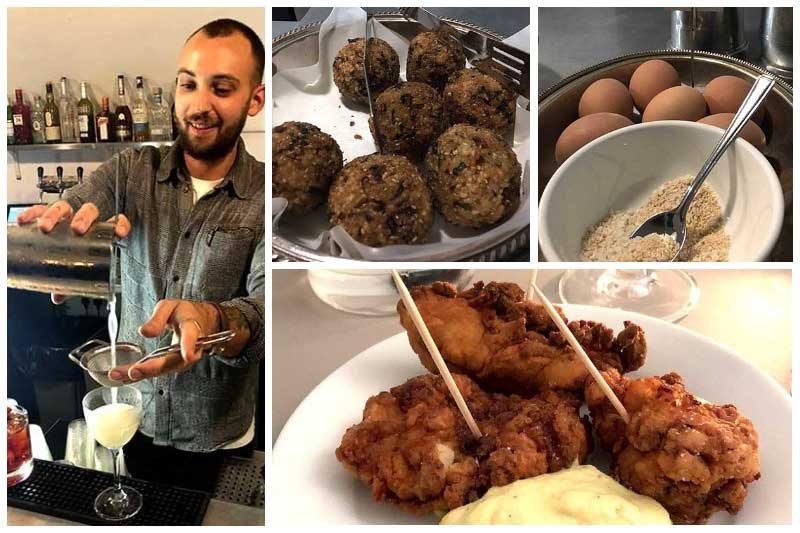 Hot Dinners popped along to the official launch of Rochelle Canteen's bar at The ICA on the Mall last night. The restaurant has already been garlanded with positive reviews since it opened (and won a Hot Dinners award into the bargain for its AMAZING rabbit and bacon pie). Now it's pushing its cocktails and bar snacks into the spotlight.

Both co-owner Margot Henderson and head chef Ben Coombs made an appearance, handing out dishes like Montgomery cheese and chutney toasties, arancini rice balls and there were platters of radishes and smoked cod's roe on the bar to go with the cocktails. There was also amazing buttermilk chicken pieces served with top notch aioli and we liked the idea of hard boiled eggs with celery salt as a hardcore way to soak up the booze.

Speaking of booze, running the bar is the son of Henderson's business partner Melanie Arnold. Fin Spiteri, who arrives here via Quo Vadis and Trullo, has come up with a cocktail list that mixes his own creations with classics. On the night our favourites were an Army & Navy (Beefeater, Lemon and Orgeat with a Maraschino cherry for garnish) and a particularly good margarita. All the cocktails here are £7.50 making them top value, particularly for this part of town.

More about Rochelle Canteen at The ICA

How to book: Email icabookings@arnoldandhenderson.com