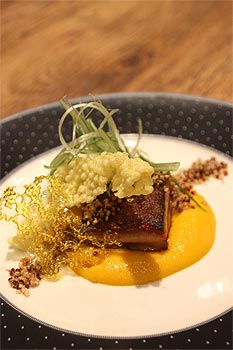 If you like the idea of trying something that's so pop-up it's a single one-off dinner, make a date for this event happening in London next month. On 3 November, a roaming travelling show known as Chateau Marmot will hit town for just one night. In the kitchen will be Aussie chef Miles Dupree from Islington's Ottolenghi (who also worked at Sydney restaurant Sepia with Daniel Puskas) serving up 'fine dining without the pomp' and most importantly without the cost.

The group behind it have been touring England since early summer, stopping at Leeds, Harrogate and York. At each point they do their best to work with local farmers, markets and suppliers.

"I’m working on new takes on classic ingredients as well as new techniques and unusual flavour pairings for this menu," says Miles. "I’m trying to reign the team in actually, their imaginations can run a bit wild!”

You only find out where it's happening a few days beforehand - but it will be in a central London location with an SE1 postcode.