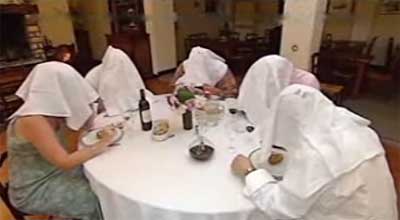 The latest in a regular series where we gather together all the food, restaurant and chef related articles we've found interesting this week. This week - songbirds, negative reviews, airline food to-go and more...

The Telegraph says that a group of top French chefs are petitioning the French government to lift the ban on serving ortolan songbirds. “They are neither very pretty nor particularly musical, but they are rare.”

Tweeting while you critique

Are British diners getting more ballsy? A piece by trade title Big Hospitality suggests that 78% of negative tweets about meals are made while folk are still in the restaurant.

Forget something as mundane as waiting in a telephone queue to book a table. Australia’s Good Food reports that anyone wanting to book when Heston’s Fat Duck comes to Melbourne will have to put their name in for the $525 (£285) menu via electronic ballot. “"Unless we charge $10,000 a head, you'd be losing money.”

But they'll never take our takeaway

The award for most on point marketing by a London restaurant this week goes to North London fast food chain Zing Zing who, as the Metro explains, put sweet and sour haggis on the menu for the Scottish referendum

Anyone yearning for short, pithy menus will be pleased by the story in this week's Washington Post on America's shrinking restaurant menus. "The International House of Pancakes (IHOP), for its part, has shaved some 30 items off its menu over the past few years."

And of course, if you're looking for London restaurant news throughout the week, don't forget to bookmark our Gastroblog feed and follow us on Twitter or Facebook.