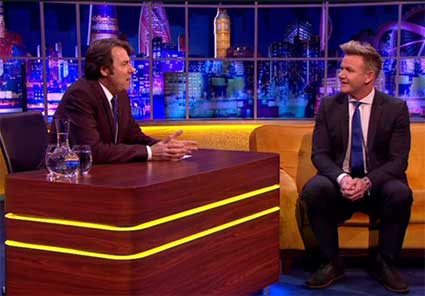 The latest in a regular series where we gather together all the food, restaurant and chef related articles we've found interesting this week. This week - Ramsay, London's cabbies, hotel restaurants and more

Rival has it in for me

You'd think a hotel that survived having a Gregg Wallace restaurant AND being the venue for the Channel 4's non-lamented Hotel Britannia show could weather anything, but a new owner for the Bermondsey GB Hotel has taken both alcohol and pork products off the menu according to the SE1 website.

It was the luck of the draw for Aussies wanting to eat at The Fat Duck during its time in Melbourne. With room for only 14,000 diners over a six month period news.com.au estimates over 250,000 folk lost out on eating there such was the frenzy for seats

One London restaurant makes it into The Daily Meal's list of 101 best hotel restaurants around the world.

Raymond Blanc's bringing in sous vide and more seasonal produce to new menus on the Eurostar from London to Paris. He tells Bloomberg that he wants "to feel proud to put my name to it."

Take a right by Murano

And knowing how many restaurants Angela Hartnett has and who the chef at Forman's used to work for is all in a day's work for a wannabe cabbie taking The Knowledge "a unique intellectual, psychological and physical ordeal" according to The New York Times.

And of course, if you're looking for London restaurant news throughout the week, don't forget to bookmark our Gastroblog feed and follow us on Twitter or Facebook.