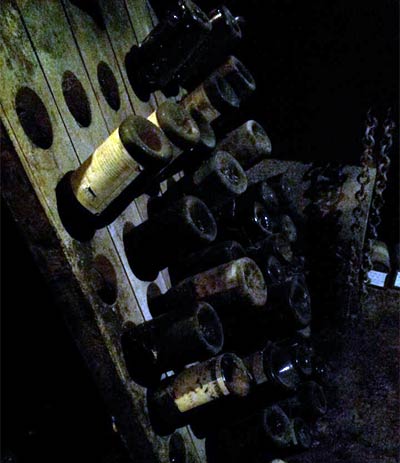 There's something in the air. There are loads more options to drink good wine in a relaxed, unstuffy environment, manned by staff who give a very real damn about the juice they are pouring. The wine landscape appears to be shifting.

The opening of The Remedy today appears to be illustrating this Brave New World perfectly. It's a collaboration between David Clawson and Renato Catgiu who met while working together at Terroirs, a restaurant which has helped to spearhead the 'natural wine' movement in the UK. David also did a stint at German Riesling specialist The Winery in Maida Vale, working with small growers and going on buying trips with owner David Motion, while Renato's love of wine started at an early age in Sardinia, growing up in a family of small winemakers, before spending ten years in the restaurant industry.

The Remedy has opened at the top of Cleveland Street near Fitzroy Square, just round the corner from Honey & Co. It's the quieter end of Fitzrovia and certainly seen as the sleepier end of this emerging dining and drinking neighbourhood.

The brief Clawson and Catgiu have given themselves is a wine bar that is focusing on 'mostly natural, mostly European wines', with David stressing that their vision for the place is "an honest wine bar serving good wine and good food. As simple as that."

While their instinct has a definite 'natural wine' bent running through their DNA, there will be classic domaines alongside the quirkier, 'natural' crew. Domaine de L'Arlot from Nuits-St-George's, boutique Californian producer Arnot-Roberts, Walter Riesling from the Mosel, Germany, Fanny Sabre Meursault, Catherine and Pierre Breton and their perfumed Bourgeuil 'Avis du Fort, the iconic Raveneau Chablis, Josko Gravner from Friuli-Venezia Giulia and a host of wines proudly wearing the natural/biodynamic stamp on their sleeve.

The food offering takes in a fair few influences, with suppliers like La Fromagerie and Ham and Cheese Co. being used, while a friend will soon be supplying his own charcuterie which will be made and cured in London. Other items will include lardo grissini with wild mushroom cream; gratinated mussels; buttered cod cheeks, saffron and lemon mayonnaise; grilled octopus, cannellini beans and "Barone Rosso"; chicken livers, caramelised shallots and marjoram; chipirones, Soppressata, grilled sweet peppers, as well as cheese and ham platters.

What about that name then, The Remedy? A bit clinical? What's the deal. David and Renato simply pointed us towards a dictionary definition:

Fair enough. Wine as life-giver, sustainer, healer, as a healing balm. We can cope with that.

Trailblazers Vinoteca were the first wine bar/shop/restaurant that really made us sit up and take notice of a new attitude towards creating a new kind of wine focused destination. Their most recent Chiswick opening has lost none of the verve and quality of that first site, Marylebone and Soho having followed in the same vinous vein. Sager and Wilde's opening on Hackney Road is another recent opening, again in a location perhaps hitherto seen as unworkable (the unlovely stretch of Hackney Road), and are also very much in the vanguard of this attitude shift amongst new London wine bars, with more to follow — it is a very welcome shift in the wine landscape indeed.

Another good wine bar in London? Bring it.