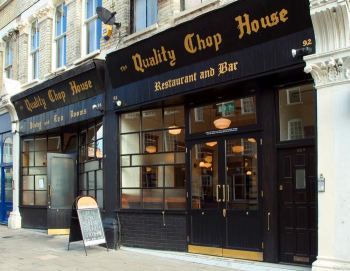 Ever since it closed its doors in 2010 and turned into a Meatballs joint, we've been a bit mournful about the loss of the Quality Chop House on Farringdon Road.

This Grade II listed building was first opened as 'progressive working class caterers', according to the immortal words outside, back in 1873. In the 1980s it had a major makeover (still keeping all the lovely fittings) and brought in a chef, Michael Soutar, trained up with Nico Ladenis to turn it into a lunch spot beloved of Guardian journos when they were still based just down the road and Hot Dinners too.

Two years ago it became Meatballs - a joint specialising in just that - and now that Meatballs have moved to Westfield, it looks as though the Quality Chop House's fortunes are on the up again. It's just been taken over by Will Lander & Josie Stead - a duo with heaps of experience in interesting places.

Will previously worked for St John and then for Mandarin Oriental while Josie was the GM of Dinner by Heston and before that at Sketch. As Will told Hot Dinners; "We wanted to open somewhere focused on great service, simple produce-driven food and very good wine at reasonable prices. I realise that's what everyone says though! The dishes will be simple and very well-sourced."

They've certainly got a good chef in to turn their dream into reality - Shaun Searley was at Bistrotheque and has sous-chef Jackson Berg alonside him, who was at St John Bread and Wine. The dining room menu will be a short a la carte and lunch and in the evenings will be a fixed menu of 4/5 courses reflecting the communal nature of the room. So an example menu would read:

In the adjoining bar there will be a separate bar menu featuring such delights as a Trentina plate (Coppa, Schiena, Speck) and Cheese platter, as well as bread with whipped lardo, brown crab toast with aioli, West Mersea Natives or maybe Middle white pig chop with parsnips and pears. You'll also be able to pick up a 'serious' takeaway sarnie for a fiver here.

Upstairs, a late Victorian private dining room seating 10 will be available for private hire with a feasting menu.

On the wine front they'll have a 90-bin wine list which will change every month with bottle ranging from £11 to £250 a bottle – all with a £5 drink-in mark up. Wines by the glass will also include some rare and interesting bottles and will change weekly. And all wines from the shop will be available to drink in, take away or you can do both and have a glass there and take the rest home with you.

The Quality Chop House will open on Monday 12th November at 92–94 Farringdon Road, London EC1R 3EA. Reservations will be taken for both lunch and dinner in the dining room. Dining Room will be open Monday – Saturday 12–3pm, 6–11pm. The Wine Bar & Shop will be open Monday – Saturday 11am – midnight. To book call 020 7278 1452 and follow them on twitter.com/qualitychop