Quaglino's cigarette girls are back for the 21st birthday celebrations 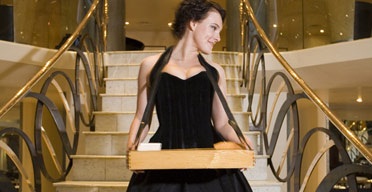 To celebrate its coming of age Quaglino’s, which turns 21 this year, has five months of celebrations planned. Next month the Mayfair restaurant will launch a pop-up rainbow Bellini Bar which until July will serve 21 varieties of bellinis ranging from Orange Marmalade to Beetroot, Black Cherry and Basil & Mandarin.

For anyone who remembers the restaurant's Cigarette Girls who bowed out back in 2007 just as the smoking ban came into force, they'll be back in a different guise, touring the dining room selling colourful Meringue Girls meringue ‘kisses’ from their trays including a Peach & Champagne Bellini flavoured meringue exclusive to Quaglino’s.

Other birthday activities planned include 21 - an exhibition of photographs by renowned photographer and film maker Dean Chalkley of 21 movers and shakers from the music world. And there'll also be a special programme of live music for April.

The restaurant originally opened in 1929, but this year's celebrations mark the 21 years since Terence Conran took it over back in 1993.