[SIGPLUS_EXCEPTION_SOURCE] Image source is expected to be a full URL or a path relative to the image base folder specified in the back-end but /blog/2013/steamryenews/gallery is neither a URL nor a relative path to an existing file or folder.
0
Shares 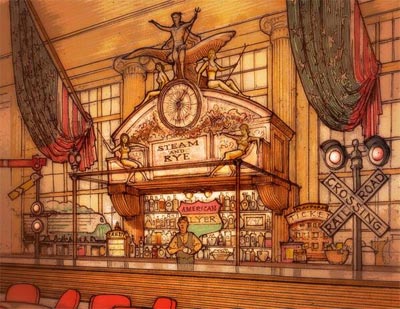 Taking full advantage of its location inside the old "Bank of New York" building right in the middle of The City, a new Prohibition style bar and restaurant is coming soon from the people behind Mahiki, Whisky Mist and Bodo Schloss.... and Kelly Brook.

The space which used to be Prism is absolutely huge and can take up to 550 people across a number of rooms. The Main Hall and Station Gardens are going to be based on on New York’s Grand Central Station - with a sculpted bar, stage, "living clock", and a Eastern Pacific Steam Train Dining Carriage. A winding stairwell will lead to the mezzanine level and the Cargo Hold - supposedly filled with various things culled from trains arriving at the "station" of which it'll be overlooking from behind a glass fronted wall.

And finally there's the 1st Class Cocktail Carriage, the smart cocktail bar with velvet and leather-lined booths which is likely to be used for private parties.

The food will be distinctly American, with USDA Grain-fed beef from Greater Omaha, BBQ spare ribs and steaks cooked on the Josper Grill. There will also be crab cakes, clam chowder and smoked pulled pork from a team led by Andrew McLeish of Michelin-starred Chapter One in Kent.

Drinks are from Andy Mil, previously at London Cocktail Club, and going on his Twitter feed he's already experimenting with cocktails that look like dynamite (with a sparkler) in a gas lantern.

It sounds as if shedloads of money are being spent on the place and quite frankly we can't wait to to take a look.

To be the first to find out about new restaurant openings, make sure you check out our Coming Soon page and sign up for our weekly newsletter.