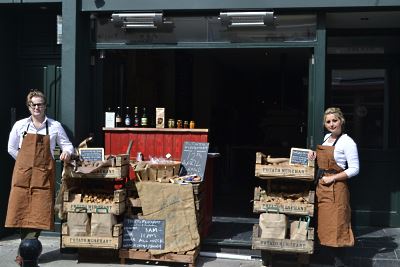 If you're like us and view potatoes as a food group all of their own, then you may be interested in a new potato-themed restaurant (and grocer) opening on Exmouth Market tomorrow (April 12).

Rather than potatoes being the side dish, they're the mains here - with sides of fish, poultry, steaks, terrines and - if you must - seasonal vegetables. So for breakfast you can have a traditional English breakfast with sautéed potatoes, bubble and squeak or potato breads. For lunch there are pies, fishcakes, tortillas, a chorizo and potato baguette and even a potato pizza all to take away. And there's also a daily potato special that you can eat in the restaurant - with salad and house white for £12.

For dinner, there's a daily changing menu with chips in beef dripping. Brunch is served at the weekends and there will be a Sunday lunch too. And - of course - you can still have potatoes as part of your dessert with a potato bread and butter pudding or a sweet potato brownie.

And once you've finished your meal, you can pick up some of your favourite spuds from the grocer. The restaurant will be focusing on lesser known varieties, so you'll be encouraged to buy something you haven't tried before to take home.

Coming from Irish stock, Hot Dinners are more than partial to a potato or dozen, so we'll be watching this one with interest.

Potato Merchant opens April 12, from 8am to 11pm Monday to Saturday and 10am to 4pm Sundays on Exmouth Market, London EC1.