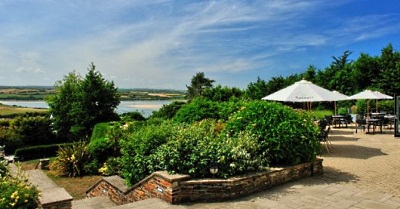 We've been hearing murmurings that Pitt Cue Co will be bringing their van to an new location soon. While we're waiting to get more info on that, we've had news of a restaurant swap they'll be doing with Cornwall's Nathan Outlaw for a couple of upcoming Sunday dinners.

On 18 May, Pitt Cue Co. chefs Tom Adams and Tom Swanny will head to Outlaw’s in Rock, Cornwall for a one-off Piggy Feast BBQ. That's it in the picture - looks nice hey?

The sharing menu will feature their own home-cured bacons and hams and beef and truffle loaded skins, followed by suckling Mangalitza mixed grill for main, with grilled asparagus, peas and gem lettuce on the side. This will be finished off with "Keveral farm messes". All this just down the road from where the Pitt Cue pigs are raised and their produce is grown.

Then on 15 June, Outlaw's returns the favour, coming up to Pitt Cue for a fish-based feast. This is part of the Pitt Cue Co. Sunday night specials and the menu will be announced on the night.