Pierre Koffmann to host Protégés dinners at The Berkeley 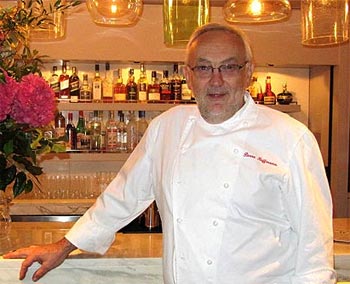 This November marks the 35th anniversary since legendary chef Pierre Koffmann opened his La Tante Claire restaurant in London. To celebrate, Pierre's asked ten chefs who earned their stripes (or should that be whites) working for him, to return to his kitchen for a series of very special dinners.

The two evenings at Koffmann's at The Berkeley - La Réunion des Chefs - will see the chefs creating a six course menu, with Koffmann on hand to make his iconic dish as the main course, Pigs trotters with sweetbreads and morels.

The line-up of chefs for the two dinners is as follows and one look at this list should show you just how key Koffmann's influence is on London's chefs and restaurants today. And just look what they're making!

The six course dinner will include a glass of Champagne and canapés on arrival and will cost £100 per person, or £165 to include matching wines for each course. There are only 100 seats on each night and bookings are being taken now at Koffmann’s by phone 020-7235 1010 or by emailing koffmanns@the-berkeley.co.uk.

The return of Pierre Koffmann - read our interview with Pierre to find out why he returned to London and his opinions of the many chefs who worked under him.