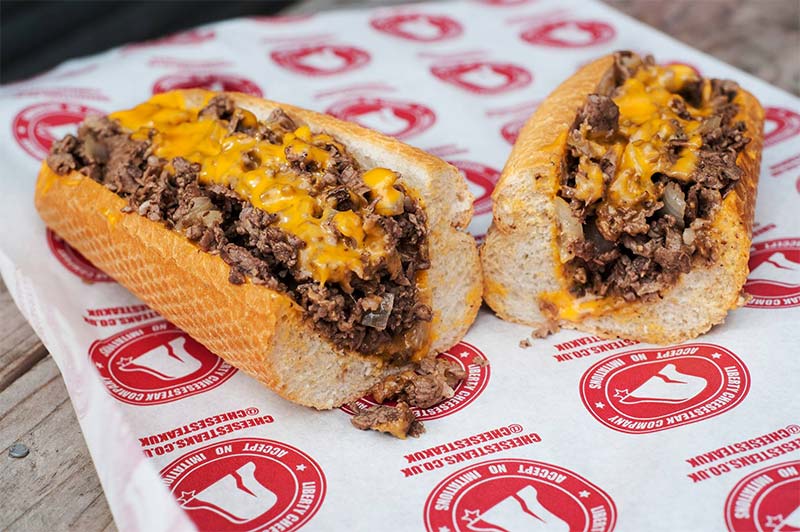 In a nutshell: Sandwiches, American-style

Summing it all up: From humble beginnings as a Spitalfields food truck to a full blown sandwich restaurant and dive bar in Fitzrovia, Passyunk Avenue has arrived in its new bricks-and-mortar form to ply us with cheesesteaks, meatball sandwiches and scrapple - a type of pork meatloaf.

If you’ve ever wanted to try one of those authentic, dairy-laden Philadelphia cheesesteak sandwiches, you’re about to get your chance. Philly-themed Passyunk Avenue is coming to London and bringing with it aforementioned sandwiches, pretzels, and more American grub. It’ll be the bricks-and-mortar incarnation of Old Spitalfield’s Markets’ former food truck, the Liberty Cheesesteak Company.

Hot Dinners caught up with Passyunk's Marketing Director Daniel Baczar to find out a little more about what to expect when it opens. He told us that the space will be split into an upstairs restaurant with a bar and room for around 100 diners and then a downstairs dive bar. "Throughout the restaurant and bar we'll have a few screens" to sceen all the American sports from football to baseball, NHL - anything Philadelphia-orientated," he told us.

In the restaurant in, you’ll be able to load up on the likes of roast pork and meatball sandwiches, soft pretzels and 'scrapple', a type of meatloaf comprising mainly of pork and occasionally buckwheat flour (and yes, we did have to Google that...)

However, the dish of the day is sure to be their borderline pornographic-looking cheesesteaks, made with sliced ribeye beef, crammed into a soft Italian roll and topped with a thick helping of their homemade cheese sauce - or ‘whiz’ if you’re using the lingo. "We're going to have cheesesteaks, hoagies and well as different variations of cheesesteaks that we weren't able to do at the truck because of the limited space like chicken cheese bakes."

Key to the whole thing is owner JP Teti's background and the passion the whole team have for their Philly roots.  "We don't want this to be just some random sandwich spot - we really want to showcase what Philadelphia is all about." To that end, the menu at the restaurant will expand beyond the cheesesteak. "We'll focus mainly on the Philadelphia regional cuisine which has the Italian immigrant influence on it - so meatball subs, chicken parm, that sort of thing."

Down in the bar, expect plenty of sports to go along with the beer, "We'd like to be the main hub for anything Philly - we're going to be working on a full cool things for the NBA and NFL to host events, it's all about making the place as authentic as possible." And while they're promising traditional American brews, including drinks you can't get anywhere else, they have also teamed up with London-based Sambrooks Brewery to supply the beer.

All in all, there's a lot of interest growing for the opening, not least from a large expat community here in London. "Since news of the restaurant came out it's been crazy," said Daniel. "People are talking about it back in Philadelphia and we threw a small superbowl party where we were surrounded by Philly folk partying, so yes, the buzz has been pretty good."

Where is it? 80 Cleveland Street, London, United Kingdom

When does it open? Soft launches from 16 March 2018 with the downstairs bar opening on 23 March. They'll be open 7 days a week with a late license till 12pm at weekends. Some form of delivery or take out is expected too.