Peruvian cuisine and Pisco Sours come to Soho with Ceviche 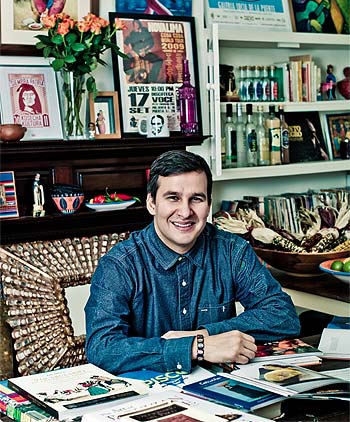 One of the biggest trends for next year promises to be Peruvian food - so there's a lot of people looking forward to restaurateur Martin Morales and chef Alejandro Bello's Ceviche, which opens March 2012.

The restaurant will, of course, focus on ceviche - freshly caught sustainable fish cold-cooked in Tiger’s Milk marinade made from lime juice and Peruvian aji chilli. You'll be able to sit on the Ceviche Bar and watch the Cevichero Chef prepare them freshly in front of you, while sipping on Peru’s national drink, the Pisco Sour, from Ceviche’s Pisco Bar, the first of its kind in Britain.

Hot Dinners caught up with Martin Morales to learn more about Ceviche.

You've been very active on Twitter raising buzz for Ceviche. How important has Social Media been to the launch?

Martin Morales: A year ago I started a Twitter account called @martinceviche. I wanted to know if anyone cared for Peruvian food like me. To my surprise, people started coming out of the woodwork. The response was amazing - so I decided to host supper clubs at my house in South London.

Through Twitter I asked who would like to come and we had chef Jose Pizarro and food blogger gastro1 among others. Neither had ever tried Peruvian food and they loved it. This gave us confidence so we held another and then another and then another. In June last year we had a lot of followers asking to try our food so we decided to hold a pop-up restaurant and tweeted about it. We sold out in one day after that single tweet, three weeks in advance. Last week I asked if anyone knew any great barmen that might want to pioneer Pisco with us and we had some great feedback.

So our @martinceviche Twitter page and our www.cevicheuk.com blog have been very important - Twitter has brought us to the attention of real food lovers. We have also found team members, suppliers, sold seats for our pop ups, invited people to supper clubs and asked for advice on everything from where our restaurant should be to what we should have on the menu.

Why do you think the time is right now for London to get a Peruvian restaurant?

Because with Peruvian food there's love at first bite. Our food is fresh, healthy and we have great recipes. Our CEVICHE pop up restaurants proved that Londoners love our food, especially our ceviches. Top chefs try to do ceviche but we have the best recipes. Everything you need to know about Peruvian food can be found in the ceviche.

We’ve travelled the length of Peru to find the best recipes and all over Britain to find the freshest fish. We’re obsessive about how short we marinate it for, the kind of lime we use, the kick from the chilli, when we add the salt and how it’s ground... It all matters to us. A lot.

Making ceviche is taken seriously in Peru and we’re bringing it to Soho. Ceviche will be made in front of you at our Ceviche Bar, fresh as you like. And we will also have superfood salads (in Peru, quinoa is king), barbecued anticuchos a-sizzling and a pisco sour or three at our Pisco Bar.

We like the sound of the Pisco bar - will you be serving up drinks you can't currently get in London and have you got a barman?

Yes we have and he is a Pisco obsessive. He loves London and knows it well but also knows the heritage which comes from working with and living with Pisco. At our Pisco Bar we will be serving the Pisco Sour - if you like Mojito, we think you will love this too - and also the San Francisco Pisco Punch, which we will be bringing back to Europe for the first time in almost 100 years.

Can you tell us a little bit more about the ceviche bar - how exactly will it work?

The technique to make ceviche is called 'cevichar'. You will see that at our Ceviche Bar. Imagine fish caught that day prepared right in front of you with a combination of moves and ingredient additions that are fast and fun to watch. Like fish, chilli and limes are breakdancing to a Peruvian beat in less than two minutes.

We've seen on your blog that you've looked at a lot of sites - have you found one now that you can tell us about?

It's in a grade two listed building which was built almost 300 years ago in the heart of Soho. Mozart, John Bell and Constable all lived nearby once upon a time. They all loved new art and sweet music and that's all in our food so they would probably want to try Ceviche.