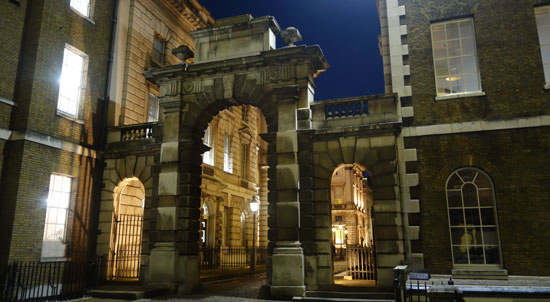 Following the opening of Sky Gyngell's Spring, Somerset House is about to open another cafe and bar in the same New Wing, which is named after the 19th century architect who designed the area where the cafe resides.

What you need to know about Pennethorne’s Cafe Bar

It's inspired by architect James by Pennethorne’s travels across Europe during the Grand Tour. So that means French and Italian food given an English twist.

They'll be a bog focus on their breads, baked on site. They'll have six signature breads (all available to take away too) They'll be Banana Bread, Orange Brioche, Walnut and Raisin, Bacon Brioche and a daily bread stick. Head Baker Michela Potesta and Head Chef Richard Robinson have also created the Pennethorne’s Bread: a Fig, Apricot and Rosemary bread made with strong plain Italian flour.

The food is described as "This is deli-style food at its best - affordable, accessible and desirable." IT's an all-day café with breakfast including Jambon gruyere croissants, smoked salmon, cream cheese bagels and soft boiled egg with buttermilk soldiers. Lunch continues with "bread, salads and sweets from the chef’s deli table" including: roast beef; blue cheese; grilled red onions; maple syrup on rye; smoked Cornish mackerel, pickled white cabbage, caraway seeds on soda bread; courgette and Montasio frittata. Lunch items start at just £5.25 so it's worth a look if you're working in the area.

And a bar concentrating on coffee during the day and craft beer, wine and cocktails at night. The Brew Bar and will focus on single origin coffees plus a ‘coffee of the month’ with new flavours and coffee art each month. The bar will stock a selection of quality craft beers, session ale, IPA, stout, lager, bitter and cider from a London brewery as well as wines from England, Italy and France, plus the best of the rest of the world. And cocktails too - starting at £4.75 - with a cocktail flights, collection of three drinks – one from each country – paired with miniature dishes.

Where is it? The New Wing, Somerset House, London WC2R 1LA

And when does it open? November