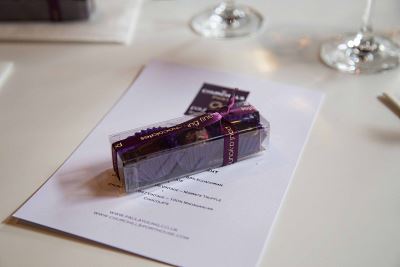 Award winning chocolatier Paul A Young has announced his latest collaboration with Churchill's port. Launched last week, the partnership sees Paul's fine chocolates matched with a series of rare and interesting ports at Churchill’s Port House, which opened last year at the bottom of Greek Street.

This latest collaboration sees Paul, whose flagship store is based in Soho, team up with London's very first port bar to serve tasting flights of port and chocolate.

There are two pairing flights available, Classic (£16), and Premium (£21). When ordering a pairing, customers are presented with a box of three chocolates and three ports, along with notes which explains the craft behind these two products and what makes them the perfect partners.

The partnership with Churchills comes hot on the heels of a busy month for Paul. He recently teamed up with Brewdog and Pitt Cue Co for the Auction Against Hunger to create a dessert involving a beer ganache, roasted salted peanut truffle and chocolate coated pork scratchings. Paul was also awarded three Golds in the European International Chocolate Awards.

At a launch event last week Churchill's founder and wine maker Johnny Graham and Paul took Hot Dinners through a few of the tasting flights, explaining firstly the port, then the selected chocolate pairing. Paul commented, 'Chocolates are a no-brainer as far as Port is concerned. There are just so many complimentary and supporting flavours to work with'.

The first flight started with an unconventional pairing of a refreshing white port with a roasted almond and honey caramel. This was followed by a juicy LBV Port (Late Bottled Vintage) paired with a Peanut Butter & Raspberry Jelly Truffle. The flight finishes with an intense 20 year old tawny port matched with an equally intense and slightly spicy cigar leaf caramel.

For port lovers there is also a wide variety of ports available by the glass. These include wood ports such as Churchill’s emblematic White Port and the 10 and 20 year old tawnies, bottle aged ports such as the Crusted, as well as Single Quinta Vintage and Vintage ports.