If you've ever wondered what the chefs and waiters in your favourite restaurant had for their lunch, then a new book out by Phaidon has the answer. 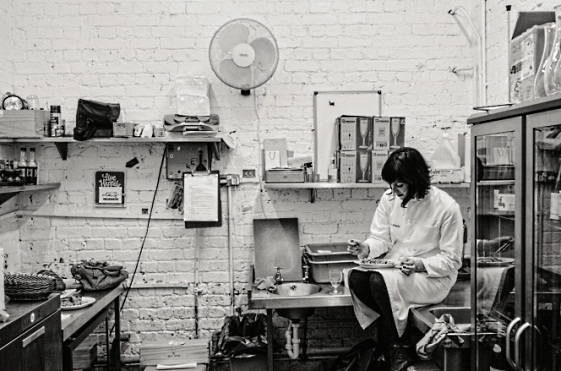 Eating with the Chefs by Per-Anders Jörgensen goes behind the scenes at eighteen of the world's most celebrated restaurants to reveal what the restaurants serve up as their family meals. And better still, features their recipes so you can recreate these meals in your own home.

Hot Dinners was given an exclusive peek at the chapter featuring London's St John, some excerpts of which we're sharing with you.

"Located just around the corner from Smithfield, the biggest meat market in Britain, which dates back eight hundred years, St. John feels almost like a part of the neighborhood’s history. It’s also one of the few places where the staff eat the same as the diners. The philosophy of using every part of the animal runs so deep that the staff have to be comfortable with it, to love it as much as Fergus. At St. John the cheaper cuts are viewed as the delicacy, and it’s seen as a real perk of the job to eat this way."

"The staff meal, then, is regarded as such a vital part of the day that head chef Chris Gillard insists that no matter how busy they are, everyone sits down at the table at 11 a.m. and again at 5 p.m. to dig into some good, old-fashioned food.It might be deviled kidney with mashed potatoes and gravy, thick cut fries (chips) with slices of ox heart and homemade tartar sauce, or bread soaked in the cooking juices and rendered fat of a hunk of pork, washed down with a mug of rea or possible a half pint of Guinness.

Eating with the Chefs: Family Meals from the World's Most Creative Restaurants is published by Phaidon on 12 May 2014. It costs £39.95. Buy your copy here.