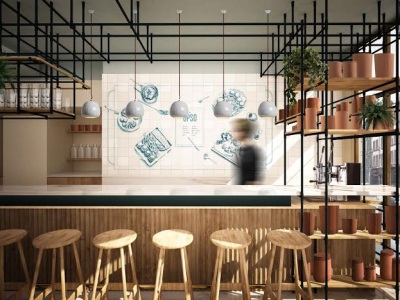 If there's one Mediterranean cuisine needing a bit of a revival in London it's probably Greek. And the arrival of Opso in Marylebone this summer sounds like it might just be good enough to do that.

This new all day restaurant is taking over the site that used to be Ping Pong on Paddington Street. Over two floors they'll be serving up both traditional and modern Greek dishes. They've got the former Head Chef of Princi in the kitchen and Georgianna Hiliadaki and Nikos Roussos, founders of the two-Michelin starred restaurant Funky Gourmet in Athens as Consultant Chefs.

So for breakfast how do you fancy Earl Grey infused rice porridge? Or maybe Tsoureki - a brioche-style bread flavoured with aromatic Greek spices, served with clotted cream and sour cherries?

For lunch and dinner, the dishes that really grabbed our attention were:

Weekend brunches also sound like they'll be offering something a little different to the jaded London palette - we quite fancy the sound of Kayana – eggs served with tomatoes, feta, fresh oregano and crispy caper buds.

Space-wise, the upstairs room will seat 45 - 18 people along one large communal table. Downstairs will be room for 30 more as well as two private dining booths with seating for 8 each. There'll also be tables outside as the weather warms up.

Hot Dinners caught up with Greek-English entrepreneur Andreas Labridis who is behind the opening.

London has a lot of interesting and high-end Mediterranean restaurants, but nothing really for Greek cuisine. What is it about Opso that will convince Londoners to try it do you think?

OPSO will be an all-day, casual dining restaurant and bar that focuses on delivering pure flavours in a laid-back atmosphere. Our inspiration has come from the tastes of Greece and the country’s social attitude towards eating, it’s what we as a team grew up with, and it’s what OPSO’s menu will celebrate. We’ll be using British, as well as selected Greek produce – importantly, the focus will be on flavours as opposed to classic Greek dishes. Produce such as honey, thyme, lamb, fish, cheese will all feature prominently on the menu. I think Londoners are excited by trying something new.

The menus are by Michelin-starred chefs Georgianna Hiliadaki and Nikos Roussos - what exactly has been their involvement and how did it come about?

Our friendship with Georgianna and Nikos goes back long before OPSO. Our love for food has always found us around a dining table, sharing stories, and when Dimitris and I first thought about opening a Greek inspired restaurant in London, we naturally turned to them for advice.

Two years ago, the conversation got out of hand, one thing lead to another, and now here we are opening our first restaurant. We are very happy and proud that Georgianna and Nikos are consulting chefs of OPSO.

Will you be featuring many Greek wines on the list?

Yes. We have selected a 40-bin wine list that includes Greek, European and New World wines. Along with the established European and new world wines, we will be offering a range of Greek wines - all of different varieties, such as Asyrtiko from the island of Santorini, and Agiorgitiko from the mountains of Peloponnese

Geographically Greece, is a diverse land with terrains ranging from high altitude peaks to long smooth beaches. Each terrain offers a unique environment for different varieties of vines to develop, and some of these varieties are indigenous to specific areas, thriving on the local climate. It’s this that makes the Greek wines really interesting, and we’re looking forward to introducing people to them – Greek wines in London are relatively undiscovered.

Who is going to be running the kitchen?

Nikos and Georgianna will be overseeing things - creating menus and training up the chefs. Day to day, there will be a group of talented chefs, led by Head Chef Stefanos Avdis. Stefanos has worked extensively in both Greece and London, training in 5* Hotels in Greece, and in London most recently as Head Chef of Princi. His experience of both countries, and his Greek heritage will allow him to develop our vision of “Inspired by Greece, made in London".