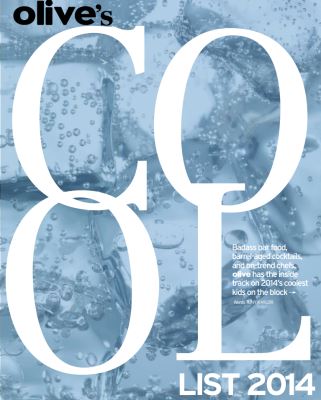 Olive magazine's current issue features its respected annual Cool List and there are a number of London restaurants and chefs featured on it.

Notably, in the section picking out trending chefs, 3 out of 5 are London based - Andrew Wong of A Wong "giving UK Chinese food a slick, gastronomnic makeover"; Robin Gill of The Dairy and Carl Clarke of Disco Bistro fame who's "looking for a permanent Disco Bistro site to open in Autumn in East London". Interesting.

Two of the trends picked out are Badass bar food where street food operators move into pub kitchens - for which they point to Lucky Chip’s burgers at Bethnal Green’s Sebright Arms; and Rock n Roll restaurateurs which focuses on the occasional DJ jobs that Daniel Willis and Johnny Smith of The Clove Club do in their - how do they find any? - spare time. They also point to fennel seed as "this year's spice" which can be found at both Lardo and Grain Store. Sherry also gets a mention, with Drakes Tabanco singled out.

And finally - they're left a little cold by the US burger invasion (Shake Shack and Five Guys), much preferring the home crowd. So at least they'll be pleased with the new Patty & Bun.

There's a lot more in the magazine so for the full Cool List look for the April issue of Olive magazine out now.