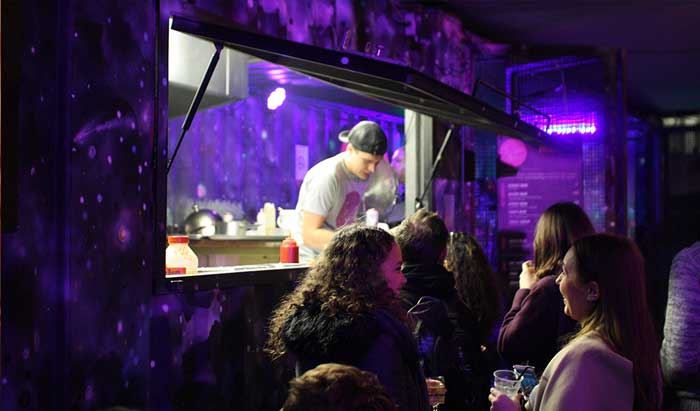 Hot on the heels of the spate of 'all-under-one-roof' openings comes the freshly re-opened Magic Roundabout, a dine, drink and dance destination with a winter theme in Old Street.

If you're after some festive revelry, but you're a bit too old for Winter Wonderland then get merry in the middle of one of London's biggest roundabouts. Hot Dinners ventured in to investigate.

While it's definitely strange to realise you're partying in the middle of nine chaotic lanes of traffic, the Magic Roundabout uses the space to great effect. It's laden with atmospheric touches, little nooks and crannies, sheltered seating areas, and suddenly it's quite easy to forget that you're dancing to funk with a pint of IPA in hand. There's lots to do as well - the Magic Roundabout boasts three bars, three themed seating areas, three street food vendors and a dancefloor, for good measure.

First up, there's jerk chicken stand White Men Can't Jerk, who'll be serving up salty goodies, including jerked halloumi and salt fish fritters as well as wings and classic jerk chicken. If you're after something beefier, there'll be burgers courtesy of Burger Bear, with their ursian-themed menu. It includes the 'Angry Bear' with 'HolyF*ck' hot sauce, and the 'Greedy Bear' which comes with everything - twice.

Vegans are also well catered for thanks to the presence of Dirty Vegan, who've wiped their hands of any healthy connotations veganism once had. It's a design-your-meal set up, so you'll be able to pick your main from options like roast cauliflower steak or smoked tofu rinds, then customise your toppings. There's a good selection, with coconut yoghurt, tahini and pomegranate salsa all making an appearance, plus with caramelised onions and almond avocado aioli.

Aside from the large central bar, those after a drink will be able to choose from a selection of beers at the Meantime Bar, or cocktails at the Bassano Hunting Lodge which is designed to ooze coziness with decorated tapestries, boozy cocktails and flatscreens which only have one channel - a roaring fire.