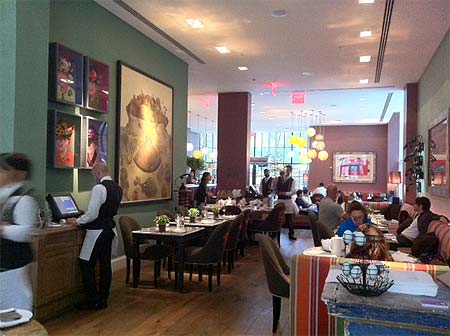 By the fourth day of our trip, it was rapidly becoming clear that our planned restaurant and bar itinerary was - how shall we put it - ever so slightly ambitious. Turns out we couldn't eat three square meals a day and still feel perky, so we decided to chill out a bit.

Weekend brunch is a New York tradition, but British hoteliers Tim and Kit Kemp (of Charlotte Street and Soho hotels fame) have made something of a name for the brunch at their new hotel in Manhattan's Soho - the Crosby Street Hotel. Certainly the main pluses, if you're in town on a fair-weather weekend, are the two large terraces where you can brunch outdoors in relative tranquility for this part of town.

We were invited to come and try the $45 brunch which includes as much tea and coffee as you can pour down your throat and a soothing drink of mimosa, champagne or Bloody Mary. You can then pick from a short list of brunch staples such as buttermilk pancakes and eggs benedict before heading to the buffet for more brunch essentials like muffins and bagels (both baked fresh on the premises).

We loved the shrimp salad and cheeses, not to mention the particularly good smoked salmon (or should we say lox?) but were utter converts to their white crabmeat cream cheese which is as addictively delicious as it sounds.

Staff were both comely and friendly and as an added bonus you're quite likely to starspot over brunch. If your budget allows, then the rooms here are something else. We were shown round a few and the floor to ceiling views over Manhattan - not to mention the incredibly well-stocked minibars complete with stars and stripes mini bottles of Pommery - were amazing.

After such a massive brunch, we had to admit defeat and cancel our first booking of the trip - there was no way we were going to be able to sit down to a three course meal that evening at Andrew Carmellini's new place The Dutch. So instead, we made use of our hotel's location in Manhattan's Koreatown. Having seen British blogger Bread et butter raving about Kyochon's Korean fried chicken, we ordered a whole heap of their double-fried soy and garlic wings and drumsticks to set ourselves up for a night out. They were as good as billed - crispy fried to order (even the salads are chopped to order, so no wilted greenery here) - and although we didn't try the Spicy ones, they're supposed to be great if you like that whole blow-your-head-off kick to your dinner. Hopefully they'll head across the pond soon - we could do with that sort of 'fast' food here in London.

Suitably fortified, it was off out on the town for a bar crawl, beginning at the pool bar on the 18th floor of the James Hotel downtown where there's a relaxed vibe, no door policy, a great view over town to the Brooklyn Bridge from the pool terrace and good, if pricey drinks. Next up was Big Bar, which turned out to be a very small bar indeed over in the East Village about the size of someone's front room with ropey wine, great draft beer and brilliant music.

Our third stop of the night, also in the East Village was probably our best - The Beagle.  This had just opened the previous month with bartender Dan Greenbaum (previously of the John Dory Oyster Bar) in charge of drinks and chef Garrett Eagleton looking after the food - both of which get equal top billing. We particularly liked the food and drink pairing boards - we tried the pressed pigs head terrne with white beans and a small sherry glass of Santa Teresa Solera rum and an Elevenses board of seed cakes and Blandy's 5 yr Buel Madeira. The fingerling potatoes are also very good indeed. Food is served until the small hours, so it's a great place to come if you arrive late in New York.

Cocktails are taken very seriously here - we had a La Rosita - tequila, campari and sweet vermouth with the mother of all hand-carved block of ice and an Astor Painless Anesthetic which is as alcoholic as it sounds. The bar staff are also working on a few barrel-aged cocktails which weren't yet ready when we were here, so do ask for them if you try it out.

The final bar of the evening was the much-vaunted Raines Law Room. This is a speakeasy-style bar where you knock for admittance and then order your drinks in the kitchen.  Here, you watch the mixologist hard at work before finding a spot in the tin-ceilinged room, which reminded us a little of Hix Bar in London's Soho. We weren't that enamoured of the drinks here - there was a lot of show over a couple of cocktails that weren't as good as anything we'd had previously at The Beagle, but it is a kind of fun place to go - and good if you want to bring a date. 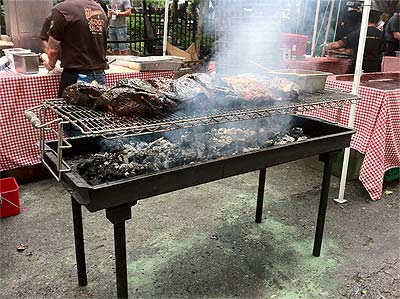 The next day - before we headed home for England, we had one last (literal) pit stop, the Big Apple Barbecue Block Party.  With BBQ becoming such a big thing in the UK, this was unmissable.  Set up by Danny Meyer of Shake Shack and Kenny Callaghan of Blue Smoke (both in the Madison Square Park area) this is a yearly event where some of the best BBQ pitmasters from all over the US congregate in Madison Square Park.   So if you haven't had the chance to try some great US BBQ, we recommend scheduling a visit to catch this next year.  Everything was incredibly good, particularly the baby back ribs from Pappy's Smokehouse and the beef brisket from The Salt Lick.

For dessert, we took the opportunity to pop over to Mario Batali's Eataly, just off Madison Square Park.  This is a must visit if you're in the area - an enormous food hall devoted to Italian food.  It's filled with everything you need to make the perfect Italian dinner as well as numerous places to eat and drink.

But once the BBQ was over, it was time to head home and go on a crash diet.  Until we get BBQ pangs and head for either see Pitt Cue Co and Red Dog Saloon...