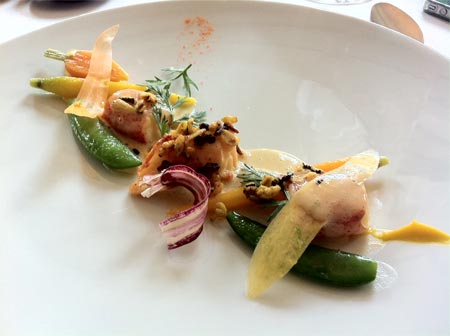 On day 3 of our New York trip we’ve established a pattern, go out, find somewhere lovely to eat, head back to the hotel to recover and then go out and do it all again.

Today we spared ourselves a large breakfast, just picking up muffins and a decent iced latte at Ground Support cafe on West Broadway, in preparation for our lunch at Eleven Madison Park, Daniel Humm's restaurant which recently won the 2011 James Beard award for outstanding US restaurant.

We'd previously been to the restaurant four years ago and, to be honest, didn't have particularly fond memories about the place - mainly due to being seated in the kind of social Siberia table that gives a place a bad name. But given all the recent accolades, we felt it was worth a second try - and we're very glad we did.

After a number of beautiful amuse bouches – the standout was a pristine white eggshell filled with sturgeon sabayon with a pool of chive oil at the base – we went for the 3 course prix fixe at $56.

There’s been some grumbling about the menu conceit here, and when faced with a square white card with 16 ingredients printed on it, we were a bit confused. Turns out you’re to pick one item from each row – the name denotes the dish’s dominant ingredient.   So “Ricotta” was revealed to be ricotta gnocchi and “Lobster” was butter poached lobster served with carrots and with a vadouvan granola sprinkled on top.

Stand-out dishes for us were the “Pork” and the “Quail” (tiny morsels of quail stuffed with foie gras terrine) – but throughout it was clear that this was food of a very high standard and well worth the accolades.  Our only grumble was that the meal could have been served with a little more theatricality which the food deserved and something which Heston pulls off with aplomb.  The only nod to this was the egg cream served at the end of the meal – made with vanilla, olive oil, malt and seltzer water – which is created at your table.  This kind of fun presentation would have been welcome throughout.

Overall, though, we did enjoy Eleven Madison Park and it’s wiped out the memory of our previous experience.

Once we’d had time to recover from the lunchtime food, we headed out again.  After a quick drink in Ma Peche (to meet London food blogger Laissez Faire who’s now Manhattan-based), we strayed out of our comfort zone and took our first trip out of Manhattan to Brooklyn.  While Fette Sau remains the go-to place for many in Brooklyn, we have a barbeque festival to look forward to tomorrow – so we thought we’d try some different Southern cooking and Seersucker on Smith Street came highly recommended.

Seersucker’s food is inspired by the childhood favourites of chef/owner Robert Newton and goes for a new approach to Southern cooking using seasonal produce.  There’s a lot to like in this smallish restaurant – including the free sparkling water, filtered and carbonated on the premises and served up in jam jars.  We started off with some crispy catfish on lettuce which was divine – astonishingly light, spicy batter matched with a similarly spiced mayo and some kick-ass hot sauce. For mains, we picked the local angus black beefburger which was really very good. London burger chefs should take note of the burger bun here, which was soft but not prone to crumbling. The burger itself was served medium to medium-rare, smashed a little on the grill at the edges. The only thing we weren’t so sure about was the decision to serve it with cheddar rather than American cheese. We also had the shrimp and grits which was, we think, the first time we’ve tried grits – an excellent dish with huge shrimps which we paired with an utterly moreish skillet of Mac and cheese. Overall, we’d certainly recommend it as a good entree to Brooklyn dining and a way to try Southern food which is a big trend in NY at the moment.

Afterwards, we wandered down Smith Street past a host of inviting-looking restaurants and bars to finish the night off at Clover Club, a louche, laid-back bar which hit just the right note for us on a Friday night – inviting yet not too crazy. We had an impeccable Gowanus Houseboat swizzle and a camomile-infused Collins which was just the ticket to get us back to Manhattan on a high.