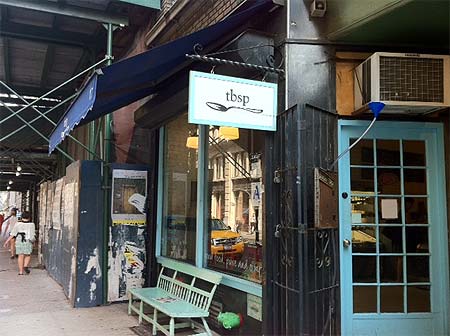 Another day in New York - another heatwave.  As temperatures scaled to record levels, we sought the respite (and air-conditioning) of some top NYC places on the second day of our visit.

The day got off to a cracking start with breakfast at midtown spot Tablespoon (aka "tbsp"). This upscale catering company recently opened its own cafe and delivery service next door to the shop where it sells its wares.  We started the day with a breakfast burrito and bacon, egg and cheese in an onion roll baked by Balthazar's bakery - all washed down with an Iced Latte (made with Stumptown coffee - the brand that seems to be everywhere in NYC). They also do a well-rated weekend brunch and you can pop next door after breakfast to pick up homemade jams, rubs or a tin of ready made yellow cake mix.

Lunchtime took us downtown to Jay Rayner's best mate David Chang's place, the Momofuku Ssam bar, to sample their new Duck Lunch.  Recently given something of a revamp the Milk Bar which had been part of this restarant, has moved across the road freeing up the area for a bar.  We went for two of the duck options as well as the world-famous steamed pork buns.  These were every bit as amazing as their reputation had led us to believe - pillowy-soft buns stuffed with cucumber and melting pork belly. We could have happily eaten these all day but we wanted to try the new duck dishes. 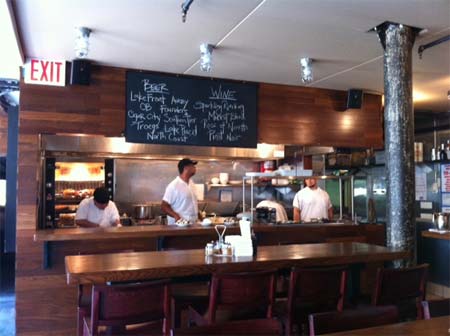 First up was the Rotisserie duck over rice - tender duck served on rice with a chive pancake to wrap the whole thing up in. That was accompanied by various condiments - including some crispy shallots and a heart-surgeon's nightmare jar of rendered duck fat. We also had the duck sandwich a crispy Bahn Mi baguette stuffed with duck meat and duck pate as well as spicy mayo.  We rounded things off with a trip across the road to the Milk Bar for some soft-serve cereal milk soft ice cream. Imagine, if you will, the malty, sugary milk that's left in the bowl after you've eaten some Frosties made into whipped ice-cream and you have this amazing concoction.

For dinner we headed down to the West Village. Pre-dinner cocktails were up at the bar of the ridiculously romantic One if by land, Two if by sea restaurant which is situated in an 18th century carriage house on Barrow Street. We had an astonishingly good Kumquat Kollins and a smoky margherita (featuring smoked grapefruit and paprika).

Our dinner destination was a few doors down at Annisa.  This restaurant by popular TV chef Anita Lo has been open for 10 years, but recently closed after a kitchen fire to reopen with a new look and a revamped menu which has drawn a lot of praise from American critics.   The food style is partly a fusion of Asian and French cuisines but the restaurant studiously avoids that F word).  We went for the 5 course tasting menu allowing Lo to pick her choice of the menu's current offering once any 'allergies or aversions' have been established.

Well, the food at Annisa was incredible - it was easily one of our best meals of the year. Top courses were the signature dish of foie gras soup dumplings topped with seared foie gras, the ceviche of fluke with black lime and radishes and then grilled wagyu with escargots, spring garlic and alba mushrooms. We were then treated to a selection of three desserts - the star being the light as a feather pecan and salted butterscotch beignets, served up with bourbon milk ice. It's an amazing place to go - we were the only non new-Yorkers in the house - so make sure you put it on your list if you're headed out this way.