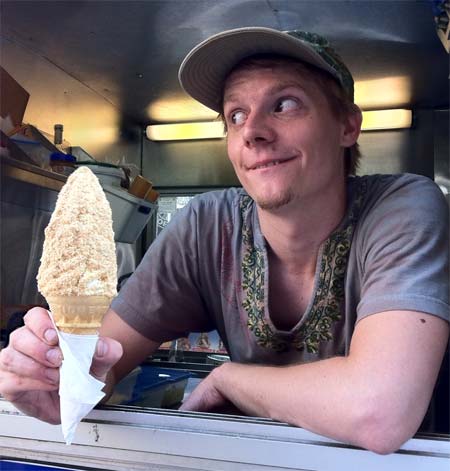 Hot Dinners has jetted off to New York for a few days to eat and shop our way through the city that never sleeps.

The trip got off to a pretty great start when the lovely people at BA upgraded us to Club Class which gave us the opportunity to obsess about food from the moment we left the tarmac at Heathrow. Trying (and failing) to look like we always travel this way, we were interested to try the menu, having seen the R&D side of things when Heston Blumenthal took on the challenge of airline food in Heston's Mission Impossible. Things were pretty good. We were pleased to see Laverstoke Park mozzarella on the menu - but couldn't turn down lobster cocktail with a mango salsa, which had plenty of taste despite being served at 40,00 feet. Beef with peppercorn sauce suffered from the reheating process, but the salted cararmel chocolate layer cake for dessert picked things up again.

We landed in New York in the middle of heatwave, with temperatures hitting a wilting 34 degrees. There was only one thing for it - we headed straight for our first New York truck - the Big Gay Icecream Truck. Described by New York Times as 'a cross between Mister Softee and Mario Batali' it serves up soft ice-cream with fabulous toppings.

We had a Bea Arthur which was vanilla ice-cream with dulce de leche drizzled inside the cone and on top with the whole thing then dipped in nilla wafers and a Salty Pimp which was a vanilla cone with dulce de leche drizzled on it with sea salt and then dipped in melted chocolate. Yes, we had to queue for about 20 minutes in the blistering heat off Union Square to get them, but they were worth it. Follow them @biggayicecream if you want to know where they're going to be on any given day.

For dinner, we needed somewhere buzzy to ward off jet lag, so we opted for Keith McNally's Schiller's on the Lower East Side (having been to his newer place Pulino's the last time we were here). As with all McNally joints (you may have tried Balthazar or Pastis before) Schiller's has the whole distressed bistro vibe down to a tee and the place was duly jumping. We were underwhelmed by the menu though, which was pretty basic. Our starter of calamari was great with a nice kick to it, but angel hair pasta with asparagus, mushrooms and shrimp was underseasoned. A cuban sandwich of roast pork, ham and cheese with jalapeno hit the mark though.  Overall - we'd certainly recommend a trip to Pulino's over Schiller's. 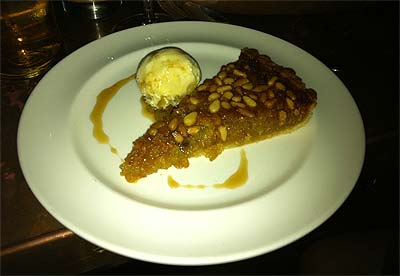 Afterwards, flagging by now, we headed back uptown to the John Dory Oyster bar, part of seriously hip Ace Hotel, for dessert and beers. A treacle tart with pine-nuts and sherry ice-cream picked us up and we were pleased to see plenty of local beers on the menu - a couple of glasses of Sixpoint pilsner from Red Hook, Brooklyn finished the night perfectly, although service was pretty so-so.

Clearly the lobby here at the Ace is the place to be at the moment - it was absolutely packed on a Wednesday night with New York's beautiful set. As Hot Dinners was feeling hot, jet-lagged and far from beautiful, this is where we called it a night.