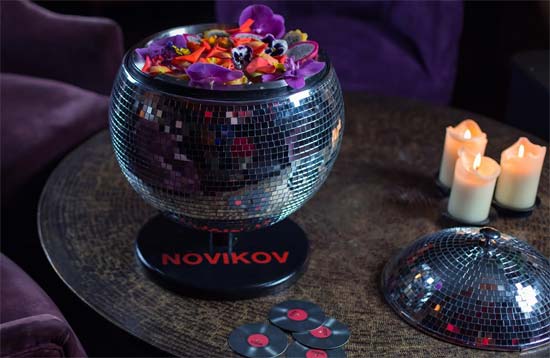 Looking for a drink that announces to the rest of the bar that you are In The House? Well this showpiece of Novikov's new disco cocktail menu certainly fits the bill. Called the "Don't Stop ‘til You Get Enough" it's made of Havana Club Selección de Maestros rum, elderflower, plum & rhubarb bitters and fresh lychee - and then topped up by prosecco or champagne.

It's not made just for one (unless you're feeling very thirsty and VERY flush) as it's designed to be shared by up to eight.  It costs £150 for the Prosecco version, £200 for Louis Roederer Champagne one and £400 for Dom Perignon if you really want the drink to match its surroundings. If you're after something a little more affordable, there's always the Russian Doll (served in - of course - Russian dolls) or the Discofox at £14 and served "in a Popcorn Box". That's a "secret blend of Novikov spirits infused with popcorn, homemade cinnamon syrup, fresh lime juice & topped with Peach & Grapefruit Zeo Bubbles."

Both are available at Novikov now along with some more disco-based cocktails.