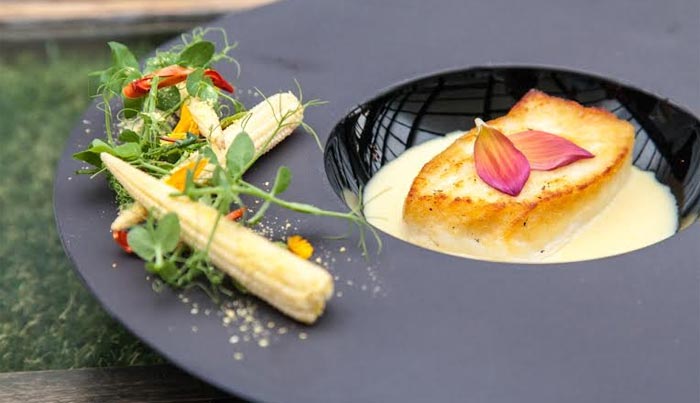 There's something of an exchange going on between London and New York at the minute. We've passed over Jason Atherton and Burger & Lobster to them for two new openings. And in return they've sent us Hotel Chantelle.

Named after a World War II safe house and inspired by the design of the rooftop dining space it occupies in New York, Hotel Chantelle London opens next month just off Oxford Street on Orchard Street, above the Bonbonniere Club.

The menu combines new American and fun French. They describe it as molecular gastronomy meets both comfort food and haute cuisine. If you're wondering what on earth that means - here are some dishes to give you an idea:

Executive Chef Seth Levine came to fame in the States through the Hell's Kitchen reality show where he reached the quarter final in Series 5. Since then he's opened a series of restaurants and bars in New York including Sons of Essex and The Stand. "“Coming from NYC, one of the most critically acclaimed foodie cities, we felt the next best place to showcase the entire Hotel Chantelle brand was London," he told Hot Dinners. "I’m always excited to have new people try my food, and opening in London gives me a blank canvas to show off my creations with a new palate”

And in addition to all that, cocktails include (all £12):

Hotel Chantelle London will be an all day restaurant, opening for brunch through to dinner and at weekends will hold a special jazz brunch.

Opening hours will be seven days a week 11.30am-11:00pm Monday-Sunday. Late night dining will be available between Thursday and Saturday until 3am, and weekend brunch will be offered on Saturdays and Sundays from 11am-4pm. Keep up with their news on Twitter @hotelchantelle