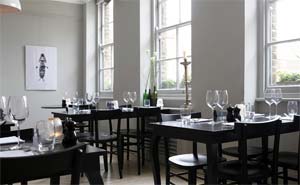 Having enjoyed Anna Hansen's dishes at her recent collaboration with Atul Kochhar at Benares, we're keen to try more of her food and the launch of a series of wine tasting menus at her Clerkenwell restaurant, The Modern Pantrymay tempt us to do just that. The menu for the first one - a Riesling Spring Tasting Menu (printed below) sounds frankly marvellous and with four small glasses of wine and a shot of dessert wine included, the price of £80 is pretty mid-level as far as wine tasting menus go.

The menus have all been designed with the help of wine consultant and Financial Times writer Bill Knott and the Modern Pantry's GM Candi Giacchetti. Upcoming menus include Natural Wine Selection which runs from mid April until the end of May, Best of British (June & July), Bad Press Grapes (July & August) and Wines from New Zealand (September & October). All will be served in the restaurant's upstairs dining room which has been given a spruce up in honour.