[SIGPLUS_EXCEPTION_SOURCE] Image source is expected to be a full URL or a path relative to the image base folder specified in the back-end but /blog/2014/princess/gallery/ is neither a URL nor a relative path to an existing file or folder.
0
Shares 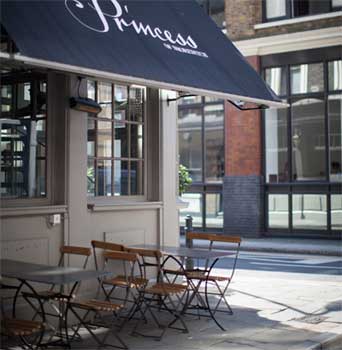 Regulars of the Silicon Roundabout gastropub The Princess of Shoreditch may have spotted changes to the pub's menu over the last month or so. Eagle-eyed foodies would have taken one look at items such as Razor clams, charred onion & fennel rubbing shoulders with Flat iron, egg & chimichurri and rightly deduced that this was the handiwork of Neil Rankin.

The Smokehouse chef has moved up in the world and out of the kitchen (at least on a daily basis). He's become Group Executive Chef at Noble Inns (which also comprises The Pig & Butcher and The Lady Ottoline).

"Asking Neil to join us on the senior management team was the logical step in ensuring our food offer is amongst the best in London," explains the group's MD Simon Holroyd. "Neil has done tremendous things with Smokehouse and has a rare understanding of food, provenance and the physical dynamics of running a kitchen."

Neil's first task in his new role was to relaunch the food at The Princess of Shoreditch and Hot Dinners popped along last night to eat our way though much of the new menu (yes, it's a hard life).

Dishes you're going to want to go along and try RIGHT NOW are Neil's take on the sweet and sour pork ball - made with slow cooked pig cheek and epicly good; we also loved the frigatelli peppers served dusted with raz el hounout salt. Oh and the confit duck leg served with duck ragu and foie gras butter was every bit as good as it sounds. Check out our gallery below for more of the dishes we tried.

What we're also looking forward to is the group's next big opening - as part of a new brand called Bad Egg. Created by Neil the new bar/restaurant will launch in the City towards the end of 2014. "The 'Bad Egg' project is something that's keeping me up at night thinking of new dishes and new ideas," says Neil. "I have a feeling it is going to shake things up a bit. People keep asking me what its like and I firmly believe it’s not like anything I've seen before."

The Princess of Shoreditch is at 76–78 Paul Street, London EC2A 4NE