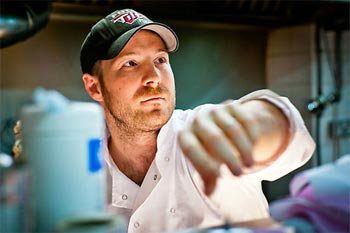 Islington continues to get more interesting as New Rankin firms up his next venture.

Having revamped John Salt and left Luke Findley, in charge, he is moving onto a new opening very close by. We previously reported on Smokehouse being somewhere in Islington, but we can now reveal that it'll be taking up the space currently occupied by the House. It'll be collaboration between Rankin and another great Islington pub, The Pig and Butcher.

The revamped pub will have a stonger focus on craft beer, with 20 on tap, alongside local ales and an exclusively European wine list from small family vineyards. And as anyone who's been to the House knows, there's a good bit of outside seating for some potential alfresco BBQ action.

As for Neil Rankin's menu, it'll be regularly changing with plenty of dishes focused around the fish and meat that's smoked on the premises. According to him, the food will "have a strong BBQ influence using a real wood and charcoal offset smoker, a bespoke robata grill and green eggs." (Those green eggs are Big Green Egg ceramic barbecues - one more thing that we covet here at Hot Dinners...)

The menu will change regularly - but it's shaping up very nicely indeed. A few early example dishes so far include lobster and spring onion frittata, fritto misto with romesco, short-rib Bourguignon, pork mixed grill and peppered ox cheek with cauliflower cheese and gravy. Alongside this, there will be nightly specials of rib racks and brisket straight out of the smoker and a bar menu to including a foie gras club sandwich, crab on toast and chicken fried ribs. Suppliers for the food will be a mix of the Pig & Butcher's existing farms and fishermen as well as Rankin's Cornish and London suppliers too.

As Hot Dinners are Islington residents and Smokehouse is only a few hundred feet from @hotdinners2's door, we're very excited indeed by this development on our doorstep. We're definitely looking forward to the August opening.

7/8/13 Update - As Smokehouse gets ready to open, we've got our hands on the full launch menu. Some things will be subject to change in the run-up to launch, but it's looking pretty impressive so far. We were going to break this down and show just an excerpt, but had such difficulty deciding what we could leave out, that we've decided to show the whole thing: