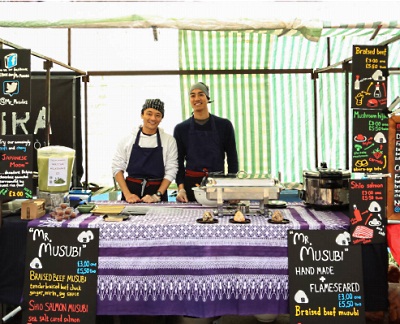 To be honest, when we first had someone tell us about 'musubi' we hadn't an earthly what they were. Happily the folk behind Broadway Market stall Mr Musubi were only too pleased to enlighten us - they're traditional Japanese snacks made from pressed sushi-grade rice with savoury fillings, wrapped in crisp nori seaweed.

Mike Tsang and Tet Ogino are the folk behind the venture. They've have taken their family recipes and adapted them for London with fillings such as slow-braised ginger beef and three day salt cured salmon. Right now you'll find Mr Musubi every Saturday at Broadway Market, serving ice cream mochi (sweet rice desserts filled with gelato ice cream) alongside their musubi.

From 2-27 July they'll be expending their menu when they run a pop-up restaurant at Off Broadway cocktail bar. They'll be serving up musubi along with other Japanese side dishes such as edamame beans, and Kyoto-style sweet egg omelette (tamagoyaki). Better still they'll also be knocking up some Japanese cocktails designed to complement musubi.