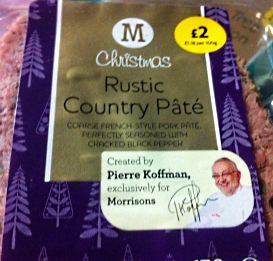 Waitrose may have Heston and Sainsbury's may be inextricably linked in people's minds with Jamie Oliver, but another supermarket has quietly been building up some rather impressive chef alliances over the past year or so.

Morrison's unveiled their Christmas food and wine offering last night to the press and Hot Dinners spotted a few big names involved with the process.

Pierre Koffmann - currently running Koffmann's at the Berkeley hotel (and mentor to more top chefs than you can shake a stick at) has come up with rustic country pate, Bryn Williams of Odettes has put his name to a soda bread and top patisserie chef Claire Clark (formerly of The French Laundry) is behind a White Christmas Pudding.

The chap behind all this stellar talent getting involved in supermarket fare is Neil Nugent - who used to work for Waitrose before he was poached by Morrison's.