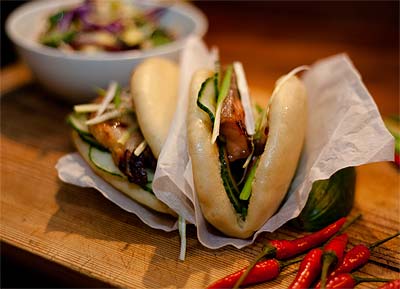 Yum Bun have long been one of the darlings of the London street food revolution that's been taking place over the last couple of years. They're best known for their soft steamed pork buns (with veggie and "special" options available too") and have always proved to be a big hit wherever they are (they were easily the biggest draw at Feast last Christmas).

Now, as we reported last week, they're opening a new permanant(ish) venture on City Road, as part of the new Rotary Bar and Diner that's launching later in February.

To find out more - we caught up with Yum Bun's Lisa Meyer...

What can we expect at the new Yum Bun?

You're right next to Rotary - how are you linked?

It'll be a little bun bar & takeaway. In the end we felt we should offer a little shelter for people to wait while we make their buns to order. Thankfully we're joined by a doorway to Rotary bar, so there'll be plenty of space to take our buns next door and tuck in with a cold beer.