[SIGPLUS_EXCEPTION_SOURCE] Image source is expected to be a full URL or a path relative to the image base folder specified in the back-end but /blog/2013/lecoq/gallery is neither a URL nor a relative path to an existing file or folder.
0
Shares 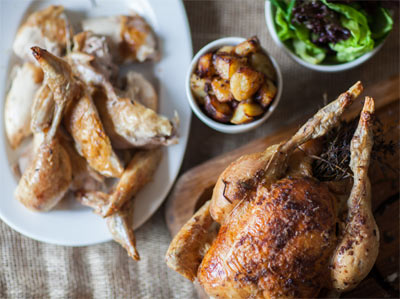 We've made little secret about our excitement about the upcoming rotisserie restaurant LeCoq in Islington, as we've been walking past the place every day since we first wrote about it. Now the opening is finally upon us and we've got exclusive news about what to expect.

The restaurant is just a few doors down St Paul's Road from Trullo (which is always packed) specialising in rotisserie chicken to eat in or take away. They'll be putting on a weekly changing three course menu - a choice of two starters, chicken and a seasonal side dish for mains, and a choice of ice cream from Sorbitium Ices or a seasonal tart for dessert.

The people behind LeCoq are Ana and Sanja Morris - Sanja founded Salt Yard Group and Ana has worked at Salt Yard, La Trompette, Bocca di Lupo, Rochelle Canteen and most recently as Head Chef of the Silkstone catering company in New York. They're joined by Head Chef Ben Benton from Dock Kitchen. Front of house is in the capable hands of Max Halley who has worked as part of Salt Yard Group for seven years, at Arbutus and is also a prolific food writer.

For the opening the starters will be either seasonal veg with lovage mayo or squid and sea aster, the chicken comes with grilled bitter leaf bread salad and desserts will be gooseberry tart or summer pudding ice cream.

And the price befits the neighbourhood restaurant moniker, at a very reasonable two courses for £16 or three for £20. Alongside this there are extras of a LeCoq liver pate crostini for only £1 and kikones (maize kernels which are a MAJOR addiction of Hot Dinners) for £2.50. There will also be potatoes roasted in the chicken dripping juice to take away for £3.

Every Sunday they'll be using the rotisserie for something very special like a whole suckling pig, beef shank or whole sea bass. And for groups, there's the option of a bespoke menu for up to 16 people in their private dining room.

For drinks, LeCoq will have a simple wine with 10 carefully selected old world wines including a rose from Ibiza imported specifically for LeCoq and not available elsewhere in the UK. Prosecco and their house red and white from Sfuso Wines will be served on tap.

If all that's made you just a little hungry - then you'll want to get moving for their soft launch. It's running from Tuesday 20th to Sunday 25th August and will be 50% off food for dinner only, with the official opening date the following Tuesday. LeCoq will be for walk-ins only (apart from private dining which starts in September).

private dining room for up to 16 people in which bespoke menus will be created using the rotisserie for any cuts of meats or fish.
0
Shares