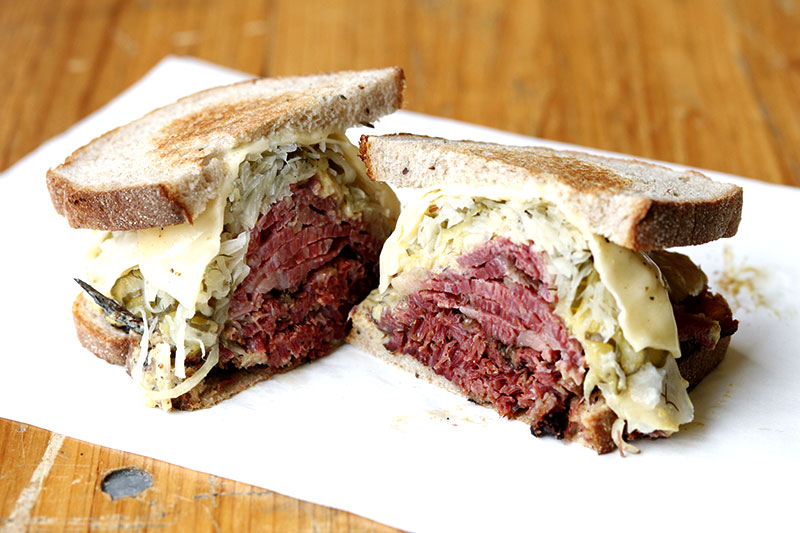 They've been a staple at Maltby for a while now, but Monty's Deli are finally making the leap to a permanent spot. Comforting chicken soup, salt beef sandwiches and other essential Jewish soul food will be available at their all-day Jewish diner in Hoxton.

Not only will there be more pastrami, salt beef and pickles than you can shake a stick at, but Monty’s Deli will have a thoroughly traditional vibe with food emphasising home-cooked flavours with everything made on-site. Meats are cured in house, pickles and sauerkraut made from special in-house recipes, while bagels are cooked on traditional cedar planks and wrapped in hessian. Monty's Mark Ogus has spent years perfecting the recipe for his signature salt beef and pastrami and Monty’s are one of the only places in Britain to make their own from scratch.

In the daytime, Monty’s will be open from breakfast onwards, making it an ideal time to grab a bagel or sweet pastry. You’re highly unlikely to go wrong with a slice of chocolate Babka, a yeast-risen cake best enjoyed (we reckon) with a strong cup of coffee. Towards lunch time, you’ll be able to sample their take on the classic Reuben Special sandwich, stuffed with the aforementioned salt beef and pastrami served on homemade rye bread.

If it’s later that you’re looking to get a bite to eat, then there’ll also be plenty of evening dishes for you to choose from. Expect whole joints of hot pastrami and salt beef, or cholent, a traditional slow braised brisket dish with plenty of lip smacking marrow for you to enjoy, served with pearl barley and potatoes.

There’ll be a Shabbat dinner every night of the week too - chopped liver, house-baked challah, and a serving bowl of chicken soup to share with the rest of your table. And there’s even more - with lokshen for dessert, beef and dill meatballs, and latkes for weekend brunch, it’s a veritable Jewish feast. Wash it all down with a fiery Slivovitz plum brandy, or a Palwin’s No. 9 Kiddush wine.