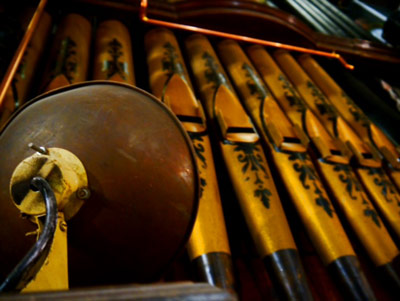 If we're not hearing about new restaurants, the next biggest thing seems to be restaurant revamps. Now we hear about MODE, a new restaurant coming to Notting Hill that's taking things a bit further. Billed as "a restaurant, cocktail bar and destination venue" they're planning to relaunch every six months as a series of "chapters".

Each of these chapters will be united by a single concept, and they're starting things with "Future Vintage", as the venue will be converted into a setting inspired by the industrial revolution.

In charge of the food is Executive Chef Andi Oliver, whose dishes will include:

He'll be rounding things off with the "Sweetie Shop" which includes

Drinks-wise, the cocktail list will feature different signature cocktails for each chapter and there will be different art installations and live music all best suited to the current focus of the venue. Also sounding interesting is starting decor with - a "six-metre sculpture of a mutant Spitfire by infamous art car artist and sculptor Ruby Soho" and a "floor to ceiling flame-throwing pipe organ". That's the organ up there in the pic - we're eager to see what that looks like in full force.

More opens with a soft launch on April 5 (pay what you want) and fully on 11 April at 12 Acklam Road, Notting Hill, London, W10 5QZ. For more information, follow them on Twitter.