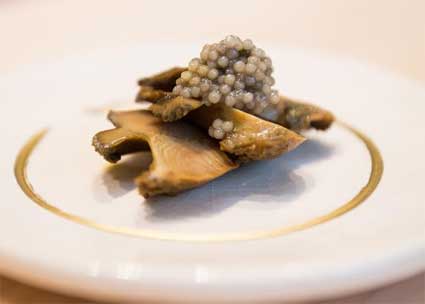 If you like sushi you'd better be prepared for world-class table wrangling. The news is out that world renowned Sushi Owner-chef Mitsuhiro Araki, whose Tokyo restaurant had three Michelin stars is heading to London.

The Japanese chef will be opening The Araki on New Burlington Street as part of Regent Street’s major new W4 development.

That's the good news. The bad news is that the restaurant will accommodate just nine people up at the dining counter and six in a private dining room. This is going to be an even bigger bunfight than getting tables at Sushi Tetsu. It's also going to be stratospherically expensive. The no-choice Sushi Omakase menu, which they're at pains to point out doesn't include tempura, meat, teriyaki or karaagedishes, is £250 per person.

The restaurant focuses entirely on the highest quality edomae sushi although the menu will experiment with traditional European flavours such as foie gras, caviar and truffle, so expect dishes like steamed abalone with caviar (pictured). As for drinks - you can opt for a wine pairing by Master Sommelier Gearoid Devaney or choose from three types of sake selected personally by Mr Araki and served in antique ceramics.

Having moved to England to open "an entirely new restaurant for the third time in my life", Mr Araki is now sourcing much of his food from Europe. His tuna comes from Spain and Ireland. But there's one thing that he's not entrusting to new suppliers - the rice is shipped from a farm in Saitama, north of Tokyo run by his father-in-law.

The Araki is now open at 12 New Burlington Street, London W1S 3BH and is taking bookings now on 0207 287 2481. The restaurant is open for dinner Tuesday to Sunday for two sittings at 6pm and 8.30pm. The private room will be opening soon.