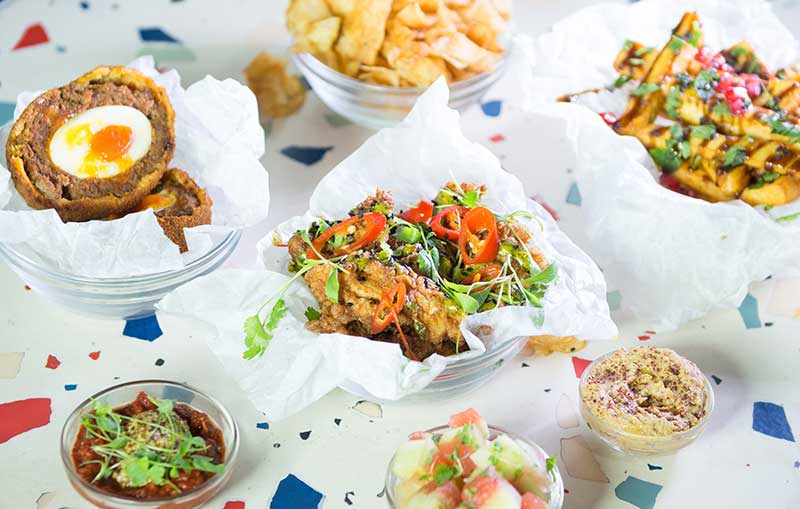 Summing it all up: In the relatively un-gentrified world of Seven Sisters, there's precious little in the way of new openings. But now, Torshi's shown up in new warehouse venue Five Miles to change that, with its Middle Eastern-style cuisine, mounds of homemade dips and a literal wall of craft beers for you to choose from.

Happy news for those who are living out in the wilds of Zone 3. Five Miles, Tottenham's new all-in-one bar, club and brewery is now also about to become a food destination when it becomes home to Toshi.

The man behind the project, Deano Jo, has definitely proven his know-how several times over, including Kingsland Road's Pamela and the now closed quirky bar and restaurant Rita's. Now, along with head chef Ed Jones, he'll be concentrating on bringing Middle Eastern-inspired food to the Tottenham warehouse district. Yes, we really did write that.

The food by Head Chef Ed Jones will largely be sharing plates that remind us Deano's background in Dalston and Hackney, so think *super*-Instagrammable dishes like halloumi fries with pomegranate ketchup.

Other choices we've been given the heads up on include:

There'll be torshi pickles to accompany your meal, and homemade hummus and baba ghanoush for you to tuck into while you wait. Plus, in the meantime, beer lovers can browse the massive, 18-tap strong craft beer collection curated by bar manager Mark Hislop (ex Brewdog and The Redchurch Brewery), or if you prefer, opt for one of their draft cocktails.

Where is it? Five Miles London, 39b Markfield Road, London, N15 4QA

When does it open? 30 September 2017. They'll be offering a 50% discount off all food until Saturday 7th October.