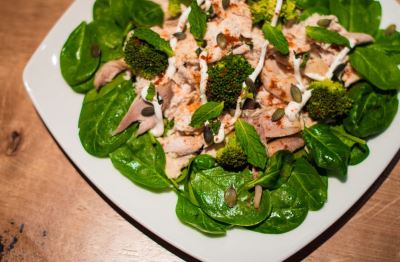 Alyn Williams is best known for his fine dining restaurant at The Westbury Hotel in Mayfair, but since December he's also been consulting on the menu at rotisserie joint Clockjack Oven in Piccadilly.

Now the first fruit of that relationship has hit the menus there - a Rooster Booster superfood salad. Costing £8.95 it's a combo of rotisserie roasted chicken, blanched broccoli, baby spinach and pumpkin seeds, harissa, and served with a light yoghurt and mint dressing.

You can order it in house - but it'll also be available through the new collection and delivery menu they've just launched.