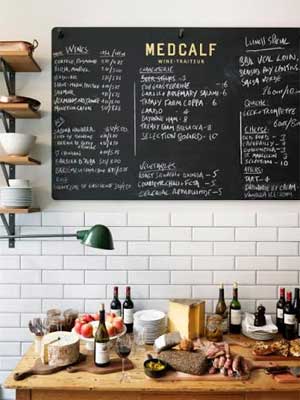 It opened pretty under the radar in the run up to Christmas, so if you haven't been down to Exmouth Market recently you may not know about Medcalf Traiteur. It's an expansion of Medcalf into the space next door which used to be their gallery.

By day it's a traiteur, focusing on the lunchtime trade. All the food is cooked on a Big Green Egg BBQ, and served with a selection of freshly made salads.

Dishes of the day are seasonal and can include:

But at night it transforms into Exmouth Market's first wine bar. Wines are served by the bottle or carafe, and there's light dinner dishes to be had from the larder, like Trealy Farm and Cannon & Cannon charcuterie, Bread Peddlers bread, terrines, house made pickles, and cheeses.

Medcalf Traiteur is at 38 Exmouth Market, London EC1R 4QE. Keep up with their news at on Twitter @medcalflondon. Opening Times are Monday to Friday: 12pm- 3pm and 5pm – 11pm and Saturday: 5pm – 11pm