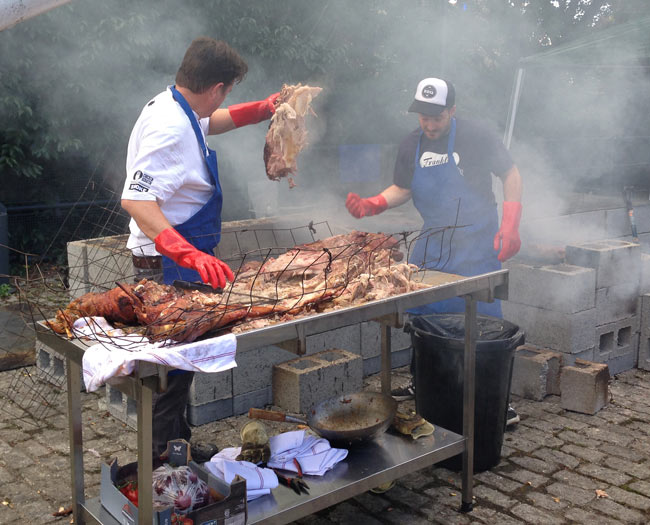 Updated 15/8/14 with the full line-up and signature dishes.

It was our favourite food event of 2013, so we're very happy to hear that BBQ and all round meat fest Meatopia is returning to London this September. An American event that was brought to the UK by Hawksmoor's Richard Turner, it easily featured some our favourite dishes of the year.

We've just received loads more info about this year's festival and - like last year, it'll have a very impressive line up. In 2014, they're returning once again to the Tobacco Docks, but are planning on taking over more of the area. The two days will be themed, too. Saturday will be "Old Skool Saturday" featuring "Classic BBQ & Southern Smoke with Electric Blues, Bluegrass and acoustic jams".  Sunday will be "New Skool" with "Contemporary Cue & Smokey Spectaculars with Electronica and DJ sets". They're also promising a few whole roasted beasts cooked on site.

As with the previous event, there will be some special overseas guests. This time, these include Andre Lima de Luca of BOS BBQ in São Paulo, Home Team BBQ featuring DJ BBQ from South Carolina, Dario Cecchini, fresh from his artisan butcher shop in Panzano-in-Chianti and David Pynt of Burnt Ends in Singapore.

They'll be joined by a huge array of guests, some of whom you'll remember from the last event and others, like Brad McDonald from Lockhart, who are Meatopia UK first-timers. The line up (which is bound to grow) currently stands at:

In addition to this - there's plenty for dessert too - which is also heavy on the bacon. The Marshmallowists are returning (signature dish "Bourbon-laced Maple and Bacon marshmallow") and are joined by two newcomers:

As before, all the meat comes from Turner & George in Islington and Meatopia 2014 will be aiming to best the 22,000 dishes which were washed down with over 10,000 litres of booze. Indeed, this year's event will have four bars in place as well as a few new additions, including:

Entry is £30 per day, £55 for a weekend ticket. All food at the event will be paid for with Meatbucks which are £5 each (1 Meatbuck = 1 dish) and if you buy your Meatbucks online in advance, 5 Meatbucks will cost £24. It may seem pricey - but this is one event where the dishes will all be unique to the weekend and we think it's well worth going to. You'll be driven madly jealous by everyone's pics on Twitter and Instagram if you don't...

VIP tickets are a tad pricier at £150 - for which you get five dishes, a free bar, table service (no queueing for you!) and Fred Smith's special burger. Those go on sale from the Meatopia website at 3pm March 27th.

We'll update as more names are released - but in the meantime to get you in the mood, take a look at last year's event.

Meatopia will be taking place at the Tobacco Docks, 50 Porters Walk London, Greater London E1W 2SF on September 6th and 7th 2014, midday to 9pm each day. For more information, follow them on Twitter @MeatopiaUK and you can book tickets from their website.