[SIGPLUS_EXCEPTION_SOURCE] Image source is expected to be a full URL or a path relative to the image base folder specified in the back-end but /blog/2012/meatmission/gallery is neither a URL nor a relative path to an existing file or folder.
0
Shares 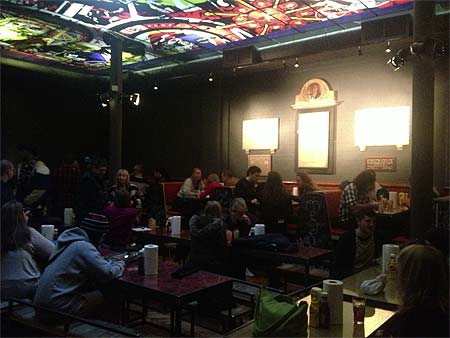 This time last year, we were all excited about a new burger joint opening just off Oxford Street.  Of course, MEATliquor turned out to be much more than that, practically cornering the market for most of the year and arguably being the ones to kick off the current dirty food trend.

Well now they're back, ending 2012 like 2011 with a big new launch in Hoxton. This time Scott Collins and Yianni Papoutsis are opening MEATmission on Hoxton Market which will surely see queues wrapping around the block. They've taken over an old Christian mission building and have put their own stamp on it, being careful not to touch any of the classic architecture and instead installing a stunning stained glass ceiling that means it's a little (although only a little) brighter than MEAT liquor.

MEATmission is divided into two sections - the bar and no-bookings area, and a more traditional sit-down area where they'll actually be taking bookings (that section will seat up to 50). Bookings will only be taken at specific times - but those are currently under discussion. There is no table turning planned, so once you're ensconced you could conceivably stay the entire night. That area also features one way glass so you can see people queuing outside but who can't see you scarfing away burger after burger. As for the food, we do know what's coming (and some of the food planned for the reservation area will be worth crossing town for) but we've promised to stay tight-lipped until they open. What we can say is that classics will be appearing from the other restaurants, there will be two new burgers on the menu too and the thing to watch out for (which we tried on Saturday) will be the Monkey Fingers - bites of chicken in their buffalo sauce.